This is the image gallery for the episode "Head Fruit".

"Beast Boy! Get your head out of the clouds!"

Starfire gasps at the news.

A branch grows out of Beast Boy's ear.

Cyborg dances while using Beast Boy as a maraca. 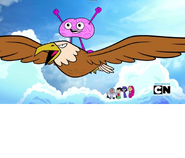 "Freedom!"
Add a photo to this gallery

Retrieved from "https://teen-titans-go.fandom.com/wiki/Head_Fruit/Gallery?oldid=355265"
Community content is available under CC-BY-SA unless otherwise noted.