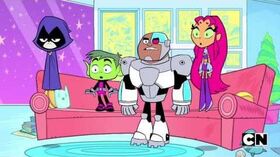 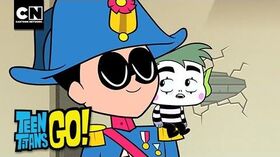 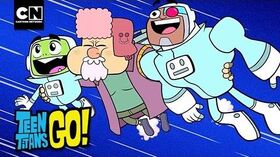 "History Lesson" is the thirty-seventh episode of the third season of Teen Titans Go!, and the one-hundred-forty-first overall episode of the series.

Robin tries to teach the other Titans valuable history lessons but the others turn his stories into their own twisted yarns.

Beat Box, Birdarang, and four of the Titans are having a dance party when Robin enters the living room, beating him up with his staff and shoving him to the ocean. Birdarang leaves after saying "Oh, dang!" as he left and he greets the others in French, introducing him as Napoleon. They question why he is dressed the way he is, Robin says that he will be teaching them about history dressed like him as his latest plan to teach the Titans. Then Raven asks if this is because they make fun of him for being short and having baby hands to which Robin declines and declares History is important. Then she declares the fact Napoleon was short like Robin too.

He counters by saying Napoleon was tall for his time and tells a story of how three French peasants (the other Titans) were helped by Napoleon and his height and that he was a general or emperor and that he was not short.

However, Cyborg disagrees, saying that his height was now appropriate these days while he took his hat anyway and he yells that History says he is not short. Then he says they will spend the rest of the night learning about History (And Robin not being short) by telling the story of the pyramids but gets interrupted by Raven who already knows it her way (Or at least she claims) and tells it.

A pharaoh (Raven) consults her leise (Beast Boy) and says that she wants to have pyramids built he says he would like that too but they do not have the proper tools only those guys (Cyborg and Robin) then an alien (Starfire) offers to help build them if she can wear Ravens crown and she accepts.

Robin interrupts, saying that aliens did not build the pyramids. Raven says they didn't do it alone. Back in Raven’s Lesson, she explains that Bigfoot and The Loch Ness monster appeared to help finish the pyramid. After it is done, Bigfoot proposes to the pharaoh and the pharaoh accepts.

Robin, now angered, exclaims that's not what happened and says that they should forget Egypt and moves on to the story of Abraham Lincoln but Starfire takes over and tells the story of 'Abraham and turkey sandwich Lincoln.'

She says that he was watching a play and eating popcorn when John Milks Booth (Robin) came up behind him and asked him to take his hat off. Abraham and turkey sandwich Lincoln (Starfire) apologizes and offers to let him sit in the booth with him and Abraham does magic tricks for him. She then concludes by saying that they became best friends and bought a log cabin and that they still lived there to this day.

While Raven, Cyborg, and Beast Boy are impressed with the way it was told, Robin tells her that was not at all how it happened. He then tries to tell the story of the first man on the moon but Cyborg and Beast Boy take over.

They say that the first people on the moon (Themselves) put a flag there but then they took off their helmets and were completely fine. They smelled something good and it was cheese. Robin interjects saying that the moon is not made of cheese. Cyborg says that it is not made of cheese but it has cheese oceans. The two astronauts then eat all the cheese but then begin farting and do to the moons low gravity start to float into space. However, they are saved by Sticky Joe and flown to safety they conclude by saying if not for Sticky Joe, the men would have been lost forever.

The other Titans were impressed except for Robin, who says that Sticky Joe is not the man on the moon and they didn't know anything about history. Then he declares it a disaster and asks Cyborg to give him back his hat. The others proceed to tease him for being short and having baby hands and the episode ends with a short of the outside of the tower it is a full moon and the moon turns reviling Sticky Joe's face.

The transcript for "History Lesson" can be found here.