Hug Head is the Teen Titans' helpful pulling ox during their road trip across the Oregon Trail. He provides loyal service for them and is thanked by being eaten.

This ox's first episode and series appearance was in "Oregon Trail". However, since he's deceased, it might probably be the only episode he's featured in.

Needing a form of transportation for the learning road trip, Robin chose this ox to pull the wagon along. Starfire instantly fell in love with him, cuddling him and naming him "Hug Head". She even said she wants to "sleep with him" (*shudder*). Robin warned her not to become attached though... they would eventually need him for nourishment along the Oregon Trail.

Hug Head did a swell job of keeping the cart going at a steady pace through the land, but when rations ran out, things turned bad for him. Starfire started eyeing him as a delicious meal of meat, but Robin remarked that they would still need his services.

Eventually, all the Titans besides Robin die. Conditions on the Oregon Trail are extremely harsh, and to avoid starving, he roasts Hug Head over a fire. All that work, and that's how he's repaid...

He later partied on the ghost yacht with the ghost Titans except for Robin.

With brown fur and white horns, Hug Head is a pretty basic bull. The top of his head (where the horns protrude from) is slightly lighter in color. A nose ring hangs from his nostrils, and Hug Head's body is well built for hauling a wagon 2000 miles AND for being eaten. 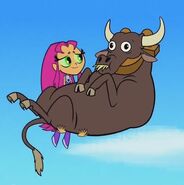 Add a photo to this gallery
Retrieved from "https://teen-titans-go.fandom.com/wiki/Hug_Head?oldid=329729"
Community content is available under CC-BY-SA unless otherwise noted.