Hey You, Don't Forget about Me in Your Memory 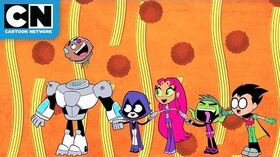 Stuck inside because of bad weather, the Titans play rainy day games after Robin convinces them that indoor activities will cheer up the clouds and make the rain stop.

The episode starts with Cyborg, Starfire, Raven, and Beast Boy reading in the living room (while Beast Boy is crying at his book). Robin enters and yells at them for reading and orders them to go outside. Starfire asks if they can finish their books first, but Robin says that he'll tell them how they end and burns the Titans and books with his flamethrower. He sets off a bomb which causes everyone to explode out of the tower along with the couch (which crushes everyone except Robin.)

After putting on some sunscreen, Robin starts to relax and tells everyone that he couldn't believe that they wanted to be inside reading. A single drop of water falls on Robin, and it begins to rain. Robin instantly commences to freak out and sets another bomb, which once again launches the couch and everyone else back to the living room, having the couch compress everyone but Robin.

Now that it is raining, the Titans want to return to their reading. Robin, however, thinks that they must now do rainy day activities. Robin then questions the Titans on why they think rain falls from the sky. Raven eagerly jumps in and describes meteorologically why rain falls to the grounds. But Robin dismisses the idea and explains to the Titans that rain falls from the sky because the clouds are sad and let tears fall back on Earth, and must be cheered up by doing rainy day activities. The Titans are horrified that the clouds are sad and become determined to cheer them up. Glad to have convinced them to join in, Robin begins performing the "spaghetti dance" and encourages the Titans to join. The Titans refuse to do the spaghetti dance, stating that they want to cheer up the clouds, but not at the expense of their dignity. However, Robin successfully bribes them with chocolate milk, and they engage in a montage of rainy day activities, such as Popsicle stick houses, making a baking soda volcano, hangman, and hide and seek. However, even after doing all this, Robin discovers that the clouds are still super bummed. Stating that they have no choice, Robin begins to do the spaghetti dance, which the other Titans still refuse to do. Robin then states that there is one other option: Heads Up-Seven Up. The other Titans warn him that it is too risky; plus, they don't have enough people. Robin tells them to let him worry about that.

Robin has gathered all the villains together and asks them to join him over a common goal: to cheer up the clouds (via a deadly game of Heads Up-Seven Up) He tells them the rules of Heads Up-Seven Up and asks if they are in. Although they are at first hesitant, they agree after Robin bribes them with chocolate milk.

One Heads Up-Seven Up montage later...

Robin finds that the clouds are now feeling good, and the rain stops. The heroes and villains celebrate by drinking chocolate milk. The Titans then return to the Tower. However, the other four Titans find that they miss the rainy day activities. However, Robin objects, saying that rainy day activities are only for cheering up the clouds, not for fun. Hearing this, the Titans wish that it was raining, so they could do the activities. They then get the idea to make the clouds unhappy so that it will rain again. They find a cloud on the roof, which they then begin insulting. Robin warns them against this, but they don't listen. The cloud starts feeling bummed out again. Beast Boy celebrates, expecting another rainy day. However, the cloud quickly becomes angry and strikes Beast Boy with lightning instead. The cloud then punches the tower and begins shooting hail at the Titans. Raven protects the Titans with a force field. Robin tells them that there is only one rainy day activity powerful enough to make the cloud happy again: the Spaghetti Dance. Beast Boy reluctantly joins Robin in the Spaghetti Dance, quickly joined by Starfire and Raven, pretending to be the sauce. Seeing that it is working, the Titans beg Cyborg to join them, but he still refuses, causing the cloud to become angry again. Robin tells the Titans that even if they don't make it, they were the finest bowl of spaghetti ever served. Right in the nick of time, Cyborg joins the others, pretending that his detached head is a meatball. The cloud becomes happy and turns into a rainbow. Robin compliments the Titans on putting aside their dignity for the greater good. The Titans celebrate by continuing to perform the Spaghetti Dance.

The transcript for "I'm the Sauce" can be found here.