I Used to Be a Peoples

I Used to Be a Peoples

"The Metric System vs Freedom" 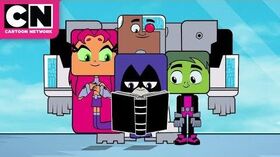 "I Used to Be a Peoples" is the twenty-third episode of the fifth season of Teen Titans Go!, and the two-hundredth-thirty-second overall episode of the series.

Robin feels the other Titans are spending too much time together so he encourages them to spend some time alone.

The Titans are a really solid, close-knit team. So close in fact, that Starfire, Raven, Beast Boy, and Cyborg have bonded into a giant block and are doing everything together. Now Robin's usually a teamwork kinda guy, but he feels the Titans are spending too much time together. It's ridiculous—the other three are even accompanying Beast Boy to the bathroom. With the help of an explosive Birdarang, Robin splits the team apart, rejects their offer of making him join their company, then shoots them out of the Tower in different directions...they're all going to have a personal day today.

After landing in a dumpster, Beast Boy gets anxious about being his own person. Luckily for him, he won't have to. Sticky Joe is relaxing in the dump right next to him, so Beast Boy snatches his clothes and pretends to be the him. It's not too hard—all he has to do is strut down the street and say "howdy!" Beast Boy starts using the greeting to make the world a better place, but Sticky Joe eventually catches up with him. At first, the vagabond is pretty angry about the identity theft, but then he starts advising Beast Boy to just be himself (communicated solely by "Howdy!"). Sticky Joe even ends up giving Beast Boy his trademark hat!

While flying through the air, Starfire figures she needs to catch up on her secret agent assignments. Assuming her "Agent OOO OOO 7" identity, she flies off to an undercover island base. Awaiting her is an evil mastermind who's set on using a giant laser cannon. Agent OOO OOO 7's not too concerned about that though; she just wants to play with the villain's kitty. Initially, the mastermind is annoyed with the agent's lack of attention, but she ends up joining in on the two's dance party. Seeing an opening, OOO OOO 7 plants explosives all over the laser (and one on the villain's face), then detonates them. Luckily, she manages to fly off with the kitty to safety.

Since Cyborg can't goof off with the Titans, he decides to hang out with his other friend, TV. He's only seconds into watching Him-Guy and Overlords of the Macrocosm when drifts off to sleep. The cartoon carries over to his dream, where he assumes the role of Him-Guy. Unfortunately, his scrawny body is no match for an evildoer known as Musclelor, and no magic is gonna help that—only hard work. After 4-6 months of no-shortcut exercise, he's finally strong enough to challenge Muscle Lord (and push him off a cliff). At this point Cyborg awakes, only to find a skull barbell right next to him. Time to hit the gym!

Raven chooses to spend her alone time by reading in the park. Her peaceful pastime is interrupted, though, when Sticky Joe farts right next to her. Disgusted, she beams him to another dimension. Not long after, a robin lets one rip, too; in fact, it seems everyone and everything in Jump City is farting today. Extremely annoyed by all this gas, Raven banishes them all away to some unknown place. She even beams HERSELF away when she farts, too.

Meanwhile, Robin's taken advantage of the empty Tower to dance around with no underwear and look through people's stuff. First he ties out Cyborg's hand cannons, then takes a dump in Beast Boy's litter box. Raven's room is Robin's next stop, but he gets out of there before a demon can possess him. When he finds Starfire's diary, he thinks he's hit the jackpot. But what he's actually hit is one of Agent OOO OOO 7's explosive booby traps. From her communicator watch, Starfire's happy to see the intruder incinerated, riding her car happily with her kitty friend.

The transcript for "I Used to Be a Peoples" can be found here.