Beast Boy
The Invisible Man is a fictional character from the book, The Invisible Man, who makes a minor appearance as an antagonist in the Teen Titans Go! episode "Books".

Raven somehow convinced all the other Titans to start reading, so she handed out books to each of them. Beast Boy received a copy of The Invisible Man, a story about a scientist who fights for a place in society, and happens to love the book.

After reading it, Beast Boy, along with the other Titans, kept bothering her to get more books for them to indulge in. Eventually, they dig up an ancient evil book that Raven buried a while back. Intent on reading it, the Titans were surprised when it released the characters from the books they were reading: Pinocchio, Benjamin Franklin, Pelicans - and the Invisible Man!

The Invisible Man began attacking Beast Boy, punching him everywhere. However, Raven arrived with the idea that if they made reading boring, the characters would supposedly go back. Beast Boy then spouted out a bunch of informative, uninteresting book comments that sucked the Invisible Man back into the book.

Since he is invisible, there is not much to say about the Invisible Man; however, he does wear some accessories that point him out, which are a set of boots, scarlet gloves, a fedora and a suspicious pair of shades. 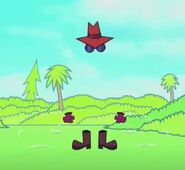 Add a photo to this gallery
Retrieved from "https://teen-titans-go.fandom.com/wiki/Invisible_Man?oldid=421094"
Community content is available under CC-BY-SA unless otherwise noted.