This is the first special that has more than two parts.

Part 1 ("Coconut Cream Pie"): The Titans are shipwrecked on a deserted island and must use the island's resources to survive.

Part 2 ("Pure Protein"): The Titans hold a team competition but have to avoid an alien hunter.

Part 3 ("Open Door Policy"): Still shipwrecked on a deserted island, the Titans try to find food but stumble upon dinosaurs instead.

Part 4 ("Crazy Desire Island"): The Titans are still shipwrecked and Robin grants the other Titans their crazy desires.

Part 5 ("The Titans Show"): The Titans try to get off the island but they realize everything is not what it seems.

To read about each episode's plots please click on the links above to the individual episode pages. 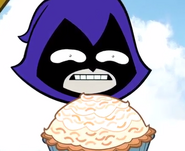