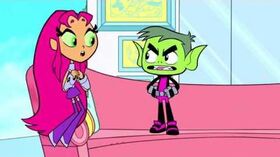 Robin ignores the rules for a game of jinx and ends up losing his voice.

This episode starts with Cyborg being unable to talk while Beast teases him with pizza. Starfire appears and eats a single slice in front of him. The young Tamaranean wanted to know why Cyborg was being quiet. Beast Boy told her that Cyborg was jinxed and, by saying his name, released him from the jinx.

Starfire thinks that their villainous friend Jinx is in the tower. Beast Boy then explained the rules of jinx to her, only to have Cyborg jinx him. He then jinxes Raven and Starfire. Robin wanted to know what was happening and Cyborg said Beast Boy, Raven and Starfire's names which released them from the jinx. Starfire asks Robin to play, too, but he declines, claiming that yelling and his loudness can get the team to do what he says (that, and he cannot be jinxed) and gives the Titans a lecture about high cholesterol and its side effects instead. Cyborg tells him to use another method to communicate, but Robin prefers loud words and yelling.

Having enough of Robin yelling and talking too much, they decide to jinx him. Cyborg intentionally sets off the crime alert, leading to Robin say, "Titans! Go!", his catchphrase and battle cry. The Titans all say "Go!" at the same time, jinxing Robin and preventing him from speaking. They warn him about the "consequences" of breaking a jinx, but keep the warning vague. However, Robin breaks the jinx and loses his voice in a magical sequence that leaves the other Titans stunned, but also relieved.

Cyborg, Starfire, Beast Boy and Raven enjoy their first day of silence, and Robin tries to get their attention through dancing, but to no avail. He also tries the international language of love to make his point, but he isn't exactly the most charming Titan to begin with. Robin later eats Birdarang, shocking the other Titans. Birdarang speaks for Robin from inside his stomach while he moves his lips. He wants the Titans to find his voice before Robin decides to eat more fish.

The Titans conclude that since Robin lost his voice playing jinx that it must be with their friend, Jinx. They immediately go to the H.I.V.E. Tower to confront her. Jinx does indeed have the voice and many others in her collection, each trapped in a special container. Birdarang pleads with her to return the voice, but she refuses. Using her bad luck magic, she makes a large object fall on Robin, forcing Birdarang out of his body.

Robin tries to use charades to communicate with his team, which they do not understand. Jinx laughs at Robin, believing that it's karma for him only using yelling and violence to lead his team which gives Robin an idea and he starts attacking his team (even Starfire). They somehow understand what he wants and attack Jinx, Starfire even admitting that Robin’s abusive behavior towards her is ‘inspiring’.

They fight, and in the process destroy many of the containers that house the stolen voices, setting them free. Jinx has had enough and she returns Robin's voice. He celebrates by being very loud and obnoxious.

Back in Titans Tower, Robin is happy to have his voice back just in time to give a new lecture about how he's always right and the others don't know what they're doing. Annoyed at Robin talking too much once more, Cyborg decides to set off another crime alert, leading to Robin being jinxed once again.

The transcript for "Jinxed" can be found here.