"How's This for a Special? Spaaaace" 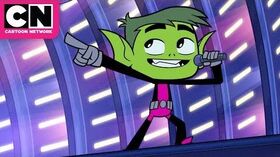 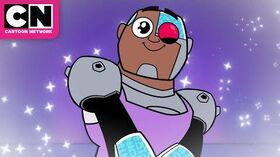 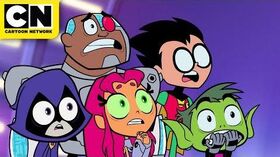 We start with Birdarang, remembering the events of the previous episode, mentions that Dummy Robin is also on the jury and that the winners will be the second greatest team in the DC Universe. Then, Birdarang interviews the Titans, and they say they will destroy the competition, mocking the other teams. Starfire interrupts happily saying that she also has her own act, but the Titans consider it strange when they call her Ringo. But, unexpectedly, the HIVE will also participate. The Titans complain that they are villains and cheat, but the HIVE defends themselves with a video showing the Titans cheating previously. Raven says that if they lose, their life will remain the same. The Titans think what act to do, and Starfire says that if they can do her's act, but it is denied. This makes Robin give him the idea of dancing... the Booty Scooty.

The Titans are ready to dance, but before they set foot on stage, the Hive crushes them and they start dancing the Booty Scooty. Incredibly, the Justice League press the green buzz, and the Titans complain that they stole their dance, but to no avail.

The Titans quickly think of another dance to do, and Starfire keeps insisting on doing her act, but Robin interrupts saying that they dance... the Lift.

Cyborg and Robin begin to dance romantically, for tenderness to the Justice League. But, when he does the Lift, Robin ends up being crushed by Cyborg, so everyone gives the red buzz, minus Dummy Robin, who falls and presses the green buzz, for the luck of the Titans.

But before Beast Boy can sing, See-More performs the song, which the Justice League presses the green buzz.

Beast Boy, nervous, thinks about what to sing, but says that he is going to sing something that his parents and friends sing all the years, makes him inspire the Justice League and the Titans, and sings ... "Happy Birthday." The inspiration ends, and the Justice League begins to put their fingers on the two buzzes. Part one ends with suspense and with Beast Boy singing nervous and meaningless, Followed by yet another cliffhanger narrated by Birderang. (Could this be the end for the Titans? Will the HIVE be voted the second greatest team in the DC universe? Will the Titans fail to remain exactly the same regardless of the outcome? Find out Next time on Justice League's Next Top Talent Idol Star: Second Greatest Team Edition!)

We started with Birdarang, who reminds us what happened in the previous part, and that all the other teams failed. We return, with Beast Boy, who is exhausted and sweaty, and the titans are convinced that they will lose, but it was not so. The Justice League presses the green buzz, and Birdarang appreciating Beast Boy for singing Happy Birthday on Wonder Woman's birthday, while the Hive pretends to have a great time together hugging and loving each other.

Meanwhile, Starfire thinks that Ringo is "Bingo" (a name of a dog belonging to a children's song) until the titans arrive and tell him that they are going to sing the song that the Hive can not copy... The Teen Titans Song. This makes Starfire sad.

Once on stage, Birdarang begins to describe the song, and we realize that the Hive will sing the same song. As always everyone presses the green buzz, except Batman.

Starfire thinks that it is a good time for her to sing, but the other Titans deny it, and they say that they will cheat, according to why the Hive has copied all of their songs and that Beast Boy will write in a paper that the Titans themselves are the winners.

Despite that, Starfire does not care and ultimately goes to the stage to sing, which at first the Titans are worried about, but her song was incredible, so much so that all the judges were shocked and praise to Starfire.

Now, they are going to choose the winners, Birdarang opens a wrinkled and dirty letter and says that the Teen Titans won.

Robin hugs Starfire thanking her, but Beast Boy ruins it all by confessing the truth, that they had cheated. The Titans say that the Hive copied their songs, but it did not solve anything.

Obligatory, Beast Boy gives the true letter to Birdarang, and the winning team was: The Teen Titans. Unfortunately, as they cheated, they were disqualified and the Hive win.

The Titans apologize to Starfire for dragging her into the mess but being kind and big-heart as always, Star forgives them and is glad to share her song, and at least on the bright side, their lives remain the same. Part Two ends with Birdarang signing out.

Now, they are going to choose the winners, Birdarang opens a letter from a golden envelope and says that the Teen Titans won, which of course eliminates the HIVE, but the Titans' happiness doesn't last for long...

Unfortunately, as the Titans are considered as cheating (although, technically speaking, Starfire doesn't count), they are also disqualified by Birdarang and nobody wins as a result until B.E.R. comes and performs a song, making everyone (except the HIVE) transform into their radical form. Despite their loss, the Titans still happily join in the performance and Birdarang officially announces B.E.R as the winners.