You’re waiting for the reward, aren't you?

Killer Moth is a super villain and common adversary of the Teen Titans who made his debut in "Missing." He is voiced by Scott Menville.

Killer Moth, an enemy of both the Teen Titans and Batman, and is the father of Kitten. He is a super villain who studies mutations as an entomologist. Killer Moth's ultimate goal is to rule Jump City with his army of mutated moths. He originally created Silkie along with many other moth larve, but all of the moths were either destroyed or missing, except for Silkie, who became the Titans' pet and mascot after they defeated him. His weapon is a prismatic whip.

In "Missing", Killer Moth unleashes an army of moths upon Jump City. However, before they can even get to the city, they are all smashed by the T-Plane, which was on its way to Killer Moth's Lair. The Titans reveal Silkie to Killer Moth, who had recently put out a reward for his return. Killer Moth thanks them and pays them, and starts cuddling Silkie. At first, Killer Moth seems to really care about Silkie, until he throws him in a vat of chemicals to transform him into a killing machine. Much to his disappointment, Silkie transforms into a gigantic, friendly worm who can talk. Silkie refuses to kill Starfire and Raven, like Killer Moth ordered him to. Killer Moth angrily walks away, avoiding arrest.

Appearances in other Media 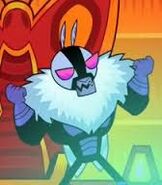