"Don't Be an Icarus" 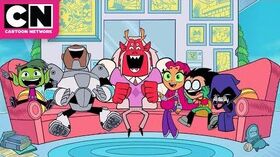 Thinking it’s a way to reconnect with her father, Raven enters a beauty pageant.

At the beginning, we see Raven taking yogurt in the fridge but she hears the others laughing. So she goes to see them and asks them what stupid joke do they, Beast Boy, Cyborg, Starfire and Robin say everything is completely normal and they do not make a joke. Of course Raven does not believe them, but they keep saying that they do not make any jokes... Raven, being upset that the Titans mean nothing, turns into a tentacle demon! By fear, Cyborg tell him everything (The fact that Raven's father made him a cassette with videos and pictures of her when she was small) Trigon comes in the living room holding a VHS, and he tells him that he would like to show him this little video. Once the cassette tape is in the player, Robin cries and says that his parents did not have time to make home videos because they are dead... then Cyborg and Beast Boy tell him to shut up because this is not the time to talk about sad things, and Robin says he’ll be quiet, to which Cyborg shushes him. The first video is cute but the others are rather difficult for Raven, especially that of her first beauty contest. (We see Raven dancing, but in the end she falls and burns the show by accident.) The Titans and her father laugh, so she gets angry, destroys the TV and goes away saying to her father is cruel.

Raven is in her room, when the other Titans come and Cyborg asks her if she is upset by them. Raven responds that she is not upset by them but she is upset by herself, to which Beast Boy asks her why and Raven responds that if she had won the pageant, her father would've been happy, and she would like to fix her strained relationship with her father by taking part in Jump City’s children's beauty contest! However, Robin tells her that she can not participate in a beauty contest (not because she’s too old) but in any case, it would be him who would win as Lil Dimples. Fortunately, the other members of the team will help by giving her a makeover. Robin (Lil Dimples) thinks it will be his makeover, but the other disgusted Titans boot him out! Raven gets dolled up by the others and she looks beautiful.

Once Raven is made up and well dressed, it’s time for her to get ready to perform her dance! Unfortunately, Raven can not do it but it’s too late, as the contest will start. Lil Dimples decides to show his dance, much to the Titans’ disgust.

Finally, the day of the pageant arrives. Once out of her dressing room, Raven asks the other Titans if they have not seen her father. But the others have not seen him, so Raven thinks he will not come, but Raven's father arrives with a bouquet of flowers in his hand was supposed to be for Raven but Robin (Lil' Dimples) takes it and gets it into his pocket by a weird way...

Once the other candidates are passed, it’s Robin's turn. He takes lollipops out of his buttocks in the form of a magic show. His final act consists of many lollipops popping out of his pocket, getting larger... until he falls over, and gets a score of 0. So it's down to Raven! Her performance really pleased the judges, and got all perfect 10s! Her father, being proud, told Raven to give him a hug. When a monster suddenly comes out of a portal, Raven's father says it was all part of his plan. The Titans knew that he was planning to unleash Raven’s inner demon. The creature attacked the Titans after they couldn’t defeat it, even *cringes* Lil Dimples. Raven and Trigon combat this monster by giving him a bow. The monster is so happy with his new look, he was overwhelmed by the combined strength of Raven and her father.

Trigon then gives his daughter the crown and congratulates her, but Robin (Lil' Dimples) steals it and puts it in his pants pocket as the episode ends, to everyone's disgust.

The transcript for "Lil' Dimples" can be found here.