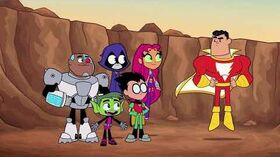 "Little Elvis" is the twenty-seventh episode in the fifth season of Teen Titans Go!, and the two-hundredth-thirty-sixth overall episode of the series.

The Titans team up with Shazam in order to defeat the evil Mr. Mind.

When a massive alien asteroid lands in the middle of Jump City, the crime alert sounds in Titans Tower. However, the Teen Titans are more annoyed than scared—all of these world-threatening invasions are getting tedious. They'd rather have a lighthearted fight like the old days... but those days are over. So they get going.

Once they arrive at the impact crater, the team is shocked to see that the alien menace is just a talking worm. Certainly a surprise, but a refreshing one. They're even more thrilled to see a boy named Billy Batson about to fight the worm. Not only that, but he can transform into the mighty superhero Shazam just by saying "Shazam!" The Titans can't seem to get over how awesome he is, but Shazam has no time for them; he has to defeat the worm, aka Mr. Mind, a tiny yet terrifying criminal. But during their conversation, Mr. Mind had dipped on them. Shazam must now meet with the Wizard, a magical man who gave him superpowers, and the Titans tag along.

The group takes an enchanted subway ride to the Rock of Eternity, where they meet up with the Wizard. He's a little bit strange... apparently, the old man bestowed his powers upon Billy because of a looming prophesy about being crushed by a giant rock—a prophesy that, for some reason, he eagerly anticipates. While looking around the lair, the Titans notice a bunch of evil looking statues; encased inside are the Seven Deadly Enemies of Man. To the Wizard's dismay, the heroes start idolizing the sinful idols. Not for long, though... Mr. Mind suddenly arrives and snatches up all seven vices, intent on releasing them into Jump City. Billy and the Titans head off to stop the wicked worm.

Unfortunately, the Seven Deadly Enemies of Man instantly overtake the Titans: Robin's pride gets multiplied, while danger comes from Starfire's anger. In greed, Cyborg flees, and Raven's indelibly filled with jealousy. Meanwhile, Beast Boy has gone soft with sloth... With the Titans disabled, the seven sins morph into a gigantic robot and start wrecking the city. Luckily, Shazam arrives to take on the monster in an epic brawl. The battle eventually ends with the destruction of the robot, as well as Mr. Mind being chucked into outer space (where a comet smashes the worm). Shazam tells the Titans that the reason superheroes have become grim and serious today is because they didn't take him or Mr. Mind seriously.

Watching from a portal in the Rock of Eternity, the Wizard is proud to see that Billy's victorious. His rejoicing is short-lived, though, as a giant rock falls on him. Prophesy fulfilled!

The transcript for "Little Elvis" can be found here.