Teen Titans Go! Wiki
Register
Don't have an account?
Sign In
Advertisement
in: Episodes, Articles under construction, Season 6,
and 7 more 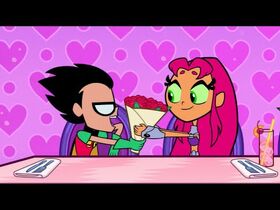 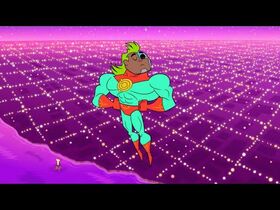 Raven explains astrology to the other four Titans and tells their horoscopes, but Cyborg does not believe her.

The episode starts with Robin stepping on a Batarang while waking up, Beast Boy accidentally turning up the cold water in the shower; Cyborg glitching while trying to update, and Starfire getting hit by the automatic door while leaving her room. The scene turns to the kitchen, where Raven drinks from her cup. The other Titans mumble and grumble as they go to their seats, only to have them break. Beast Boy, fed up with the back luck asks why nothing is going their way. Raven explains, "It's because Mars is in retrograde.". The Titans misunderstand and think that Martians are causing them bad luck. Raven corrects them and explains that during retrograde, Mars appears to reverse its orbit, which causes bad luck. Cyborg says that it's baloney, and throws a slice of baloney at Raven. Raven objects, saying its astrology, and uses her magic to make a book of astrology appear. Starfire asks what astrology is. Raven explains that it's a science that explains how planets and stars define your horoscope. Starfire misinterprets "horoscope" as horror-scope, saying it sounds horror-able. Raven corrects her, saying that a horoscope is a prediction about one's future and that non-believers could experience terrible things.

Cyborg interferes, saying "that's a grip of baloney right there" before throwing a stack of baloney at Raven. Raven is amazed Cyborg doesn't believe, but he keeps saying it's "ba-la-la-la-la-la-la-loney" and throws more slices of baloney at Raven. Raven objects and reads a bit of the book to support her opinion. The book explains that at birth, you're assigned 1 of 12 constellations as your "sign" based on your birth month. The 12 constellations as a group, AKA the zodiac, control one's destiny based on their sign. Beast Boy's sign is Taurus, which makes him lovable and charming. Beast Boy starts flirting with Raven, due to the horoscope calling him lovable. Raven hits him with one of her magic fists and tells Starfire her sign is Pisces, making her compassionate and understanding. Starfire says she understands that "the very much", and believes that there might be something to horoscopes after all. However, Cyborg disagrees, saying that the personality traits of the signs are so vague that they can be applied to anyone, but Raven says, "Spoken like a true Aries. Fiery and overconfident." Beast Boy and Starfire agree with the personality traits assigned to Cyborg, but he says the astrology is a triple stack baloney sandwich and throws one at Raven. Cyborg then takes the astrology book and throws it in a rubbish bin, calling it "garbage". He then leaves the room.

Cyborg, Raven, Robin, and Starfire sit on the couch watching TV. Suddenly, Beast Boy changes the channel to watch stocks. Cyborg complains, but Beast Boy says he has to watch the stocks channel; Raven complies, saying that Jupiter is close to Taurus. This means that Beast Boy can take high risks and get high rewards. Beast Boy says he's gonna give his entire savings to stocks. But Cyborg states that those are I.P.O stocks that are super high risk and that those "Fat Cats" at Wall Street are trying to take his money. But Beast Boy claims that junk bonds have higher risks and returns, so he invests in those instead. Suddenly, money comes out of his communicator. When Raven asks Cyborg if this is all baloney now, He thinks it's fried baloney dipped in baloney sauce and states that the only thing Beast Boy proved is investing in the stock market is a huge gamble that sometimes pays off. Robin was up next to see what is his horoscope, Raven says that Neptune is in transition around his sign, Capricorn, today, which means he should expect big things, Then suddenly, his legs began to grow up to the roof, much to his delight. When Raven asks Cyborg, "Baloney?" he replies with "Total Bologna" and states that teenage boys like Robin have growth spurts all the time. And finally, Starfire is last to know what her horoscope is. Raven states that Venus is crossing paths with her side, which means she will find romance. Upon hearing this, Robin asks Starfire if she wants to join him for dinner, to which she accepts, much to his joy.

At night, Robin finally has his dream dinner date with Starfire on the roof. However, he isn't happy at all because Starfire has invited the others. Nevertheless, he gives her roses, and dinner is a plate of beef Wellington, which she loves. Just when Robin is about to dig in, Starfire zaps him with eye blasts and falls in love with the Beef Wellington. Robin is outraged and states that it isn't even alive. She proves him wrong by putting a top hat, monocle, and mustache on the beef and making it talk. Robin confronts the beef Wellington for ruining his date, and Starfire makes it beat him up and flies off, much to his dismay. When Raven asks Cyborg if he believes in the power of horoscopes now, Cyborg disagrees, saying that Starfire's always falling in love with inanimate objects. Robin wishes he was an inanimate object and runs off crying. Beast Boy is starting to get hungry, so Raven makes a pizza appear on the table. Cyborg suggests putting some anchovies, but Raven warns him that he shouldn't eat it because Saturn is an equinox, which means he should avoid sudden changes, but he eats a slice of anchovy pizza anyway, which caused him to vomit off-screen. In between vomits, Cyborg continues to tell Raven her horoscopes are bologna.

Back at the tower, Robin changes a lightbulb in the living room all by himself, while Raven continues reading her astrology book. When Cyborg comes into the room moaning, Robin brags about his height letting him change the lightbulb. Starfire brags that she and "Mr. Beef Wellington" have got engaged and starts kissing her fiancé. Beast Boy brags that he made a suit out of the dollar bills he got. Raven tells Cyborg good things to happen when you stay true to your horoscope, but Cyborg finally loses his patience. He takes the astrology book and holds it over his head angrily wanting to destroy it; Raven says that the Zodiac shouldn't be messed with. Cyborg yells "BALONEY" as he rips apart the book. After the book got ripped, Robin's legs go back to their normal size, Starfire's "husband" disappears, and Beast Boy's suit goes with it. Everyone gets angry at Cyborg for destroying the book, but Cyborg just says none of it was ever real. Just then, lightning strikes and the alarm goes off. Robin orders the Titans to go to the roof, and they do.

They take the elevator, and when they get out, Starfire says she sees a shooting star. A blue streak of light comes to Earth. Raven realizes it isn't a shooting star; it's The Zodiac! It stops in mid-air, looking ticked off. The Zodiac starts off looking like the sun, but the constellations and symbols appear after. Robin states that it looks angry, and Raven agrees, saying it's Cyborg's fault because he destroyed the book. Raven asks one more time if Cyborg thinks it's baloney, and Cyborg says no, while still throwing a piece of bologna at Raven. The Zodiac spins until the Sagittarius symbol shows up. From the symbol, arrows fly, attacking the tower. The Titans run and duck behind a generator. Cyborg encourages the other Titans to fight, but they flake out on him since he broke the book. Cyborg looks at the Zodiac in awe as it growls. The Zodiac spins once again until the Aries and Taurus signs show up. From those signs, a ram and bull head shoot towards the tower. Cyborg retaliates by shooting the Zodiac. It defends itself by rotating until the Pisces sign shows up. From it, two fish swim in a circle in front of the Zodiac, deflecting Cyborg's lasers back at Cyborg, who realizes his powers are useless. Raven tells him that only planets can affect the Zodiac and that only true believers can harness their power.

Cyborg now realizes the power of Astrology and uses it to defeat the Zodiac. Raven is proud of Cyborg and tells him about his horoscope saying that he would face a great challenge and to watch for coming trains. However, despite learning his lesson, Cyborg denies it as baloney as the episode ends with him being run over by the train that somehow got in the elevator.

The transcript for "Lucky Stars" can be found here.