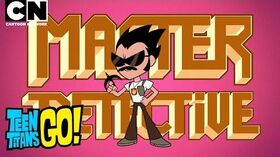 "Master Detective" is the seventeenth episode of the fourth season of Teen Titans Go!, and the one-hundred-seventy-fourth overall episode of the series.

Robin uses his skills as a master detective to discover what happened to the animals that live outside Titans Tower.

The episode starts with Robin doing unknown detective work. Eventually works his way over to the couch, where he says to the Titans' surprised faces that they are wondering what he is doing. But they are not, and he states himself a master detective. Raven asks what makes him a master detective, and he makes three cases.

One: he can use small facts to deduce what he is looking for (stating that from Cyborg's stain and the cool breeze coming from the kitchen, he had ice cream and did not close the freezer.) Two: powerful knowledge. Three: gut instinct. Raven, yet doesn't think he is a master, asks him about the animals on the rock, stating they change every 52 adventures. Robin pronounces that he noticed it but didn't take it into account.

Then Starfire says the rock eats the animals, Cyborg says they get cash and leave, Beast Boy says they got taken away by aliens and are being experimented on, and Raven says they eat each other. Robin agrees with all of them, except Raven, stating it was boring. He then tells the Titans that they had planted there to spy on them and takes the octopus (the current animal on the rock) into an interrogation. Raven thinks it is dumb and asks Robin if he plans to ask it questions. Robin, however, says that interrogation is very important. Raven carries on by saying he can't talk, but Robin says they will speak soon and yells at it: "What have you done to the pelican, the crab and the seagull."

When he shrugs, Starfire says he is adorable and picks him up, and the rest of The Titans except Robin follow and start to tickle him. Robin yells at them to stop tickling the subject. The octopus camouflages and jumps on the wall. Robin now knows he is hiding something and yells: "Who are you working for, WHO!," and the octopus sprays him. Robin then states he told him everything already and shows them three dots on the octopus' head. Raven thinks it is stupid saying that they are just some random dots. Robin agrees but then says until you push them together and finds a triangle:

The Titans are impressed, and Beast Boy asks him what the triangle means. Robin responds by saying it symbolizes the Illuminati and says they will have to go to the bottom of the ocean. When they reach the bottom, Robin finds barnacles. Raven, who is unimpressed, asks him if his big clue was barnacles. He says yes because he knows that they only live in shallow waters, which means these barnacles were fake. Robin then blows up the rock. All The Titans cheer except Raven, who says he just blew up a rock and states that it does not prove anything.

Robin states that Raven has no faith and says: "We shall see. We shall see." The Titans continue through the rock and find a cave. Robin tells the crew to sit back, relax, and watch the master detective work. Hours later, he is still looking and making preposterous statements. Raven, who has had enough, says that he is not a master. She then states that a real master would have found out the answer a long time ago. Robin, who is motivated by these words, digs again and again until he finds the Illuminati's symbol. Even Raven this admits skill. They broke into the headquarters and saw their plans and cash.

Then Lumino breaks through the wall saying that he is the head of the Illuminati. Robin asks for answers and starts telling them about their plans for world domination. Robin interrupts by telling him they don't care and they only care about the animals. But Lumino says he knows nothing about any animals. So The Titans fight him for answers and win.

Lumino still says he does not know anything and says he will stop all his plans if they let him go. A disappointed Robin says they hit a dead end. The other Titans are enraged, saying he is not a master detective and has wasted their time. Robin breaks down and admits he is not a master detective and leaves. Raven rolls her eyes and teleports them back home. But once they are all gone, Lumino escapes and opens up his cloak, showing the animals. Then the octopus comes and eats them all.

The transcript for "Master Detective" can be found here.