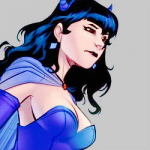 Hi and welcome to my message wall. Got a problem, question or just want to chat? Feel free to leave me a message and I'll get to it as soon as I can. If I don't get to you right away please wait and be patient. Thank you.Edit