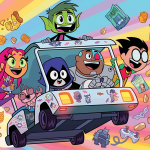 This is the verified account of people working for TTG at the studios.

You may ask questions about the show here.

Please DO NOT spam their message wall. As they are busy most of the time creating ideas/assets for the show, they are very busy. Failure to obey this rule will result in a wiki block.