Millionaire and his Wife

The Millionaire and his Wife are a high-living, materialistic couple who become stranded on the same deserted island with the Teen Titans.

These two minor characters are briefly seen in "Coconut Cream Pie" and "The Titans Show" which were episodes of Teen Titans Go! Island Adventures.

In "Coconut Cream Pie", when the gigantic wave capsized The Titan Yacht, the millionaire and his wife were stranded along with the superhero team. These two rich folks really had no business being there, but for some reason, they were. Later, when the Bamboo Titans Tower was being built, Robin made sure that Starfire, a movie star, is not employed in backbreaking work. Instead, she went to relax in some shade (thanks to a bamboo awning) with the two high-end passengers.

As Beast Boy was preparing the rocket to get off the island, the millionaire and his wife requested luxurious items onboard, including first class chairs, a fish tank, a disco ball, stairs, beanbag seats, a telescope, a reading lamp, and a grizzly bear carpet. But the stranded rich people didn't get to keep their items as Cyborg and Robin ordered it of the rocket to save weight.

In the "The Titans Show", as island extras, they beat up the mockingbirds with their bags of money. 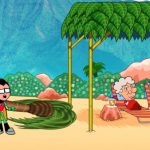 A screenshot of the Millionaire's Wife (currently the only image available).

The Millionare and his wife about to beat up the Mockingbirds.

Add a photo to this gallery
Retrieved from "https://teen-titans-go.fandom.com/wiki/Millionaire_and_his_Wife?oldid=380966"
Community content is available under CC-BY-SA unless otherwise noted.