Mount Justice
Miss Martian (M'gann M'orzz/Megan Morse) is a Martian and a member of Young Justice. She makes her debut as a minor character in the episode "Let's Get Serious".

Miss Martian first appears in the episode "Let's Get Serious", where she, along with her teammates Aqualad and Superboy, help rout the H.I.V.E. Five that the Teen Titans were too silly to handle. She, however, has no lines in the episode.

In "What We Learned at Camp", after the summer camp reaches to an end, she is seen crying and hugging with Artemis before her uncle Martian Manhunter in his car came to pick her up.

She is a green-skinned female humanoid with amber eyes outlined by prominent black lining and shoulder-length red hair. She also has freckles on her cheeks.

Her former primary outfit consists of a short-sleeved white top with a red X on it, along with blue skirt, cape, gloves, and ankle-high boots. For covert work, she dons a long-sleeved black suit with the same red X, black shoes, and her blue cape; the overall style is similar to the clothing worn by the Martian Manhunter. While at Superman's Fortress of Solitude, her suit remained in the same style, except white. 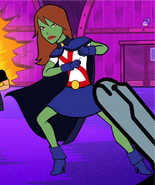 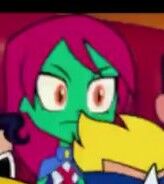 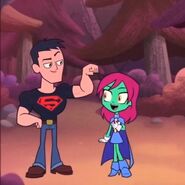