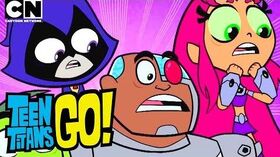 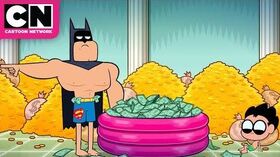 "Mo' Money Mo' Problems" is the fifty-first episode of the fourth season of Teen Titans Go! and the two-hundred-eighth overall episode of the series.

The Titans make Robin give them a tour of Wayne Manor and discover how fun it is being rich.

The episode starts with Beast Boy eating every fruit and vegetable from the fridge as a bear when Robin comes in and hits Beast Boy with his staff to compel the latter to get the food out of his mouth. All Beast Boy can ever say is that he needs calories, and Robin can't understand why though. Then after the other three Titans enter the dining room, Beast Boy notifies them that he needs to rest in a cave because bears sleep in caves (in other words, he claims that he’s going to hibernate). Starfire asks where they can ever find a cave, and they all asked Robin to let them use the Batcave.

After they arrive at the Batcave and Starfire sings a very peculiar lullaby, Beast Boy reveals that he has pranked them once again, which is not very pleasing. But the Titans notices a pole in the Batcave, and Starfire doesn't know that Batman is also "the fireman." Raven says she LOVES fires, and Cyborg says he LOVES stations, so out of excitement and curiosity, all of them ask Robin once again if they can go on it. Robin allows them, so they all go "up" the pole. The next scene reveals a stunningly gorgeous-looking room, and they ask Robin again what it is. Robin tells them that this is Wayne Manor, the place that he grew up in, and the other Titans are VERY surprised. They ask him if they can go for a tour around Wayne Manor, but Robin says that they cannot because they are not allowed. Nonetheless, the other Titans make a run for it.

Robin then takes them on a tour of the whole mansion, where he shows them all of the rooms and the secret compartments and introduced them to his butler, Alfred. Then he shows them a little compartment which is revealed to be his bedroom. He shows them his stuff like his lucky bucket that wipes away all of his tears when he is sleeping and explains to them that what he has learned from Batman about money is that money is not meant to be spent, but to be only used for crime. He told them that he did not spend his whole life around money; instead, he spent his life training to be a master crime-fighter for justice. A flashback reveals little Robin training with his staff and not being allowed to go near money.

Among everything, what Robin has wanted for years is a poster of the 90's R&B trio "Bel Biv Devoe," right on his bedroom wall. He tells them that their lyrics, their behind-the-scene actions, and all of that jazz taught him to be a great and awesome hero. He also begins to sing their biggest hit "Poison." The other Titans suggest that they can use the money from this place to get him what he has always wanted. And that's what they do! They use up all of the money to buy themselves what they want, and get a poster for the bedroom, of course. Robin is beyond elated! What's more, they launch the "money fireworks" for celebration.

But then, some of Gotham's MOST WANTED villains see the fireworks and make a run for Wayne Manor. The others are very shocked, and Robin is very upset that everything they own is being robbed. Then a fight breaks out between the Titans and the Gotham villains: Starfire against The Riddler, Robin against The Joker, Raven against Catwoman, Cyborg against The Penguin, and Beast Boy against Poison Ivy. But all of the Titans are unfortunately knocked out, until Alfred comes to save the day! The butler skillfully uses the villain's weaknesses to vanquish them one by one and eventually sends them away.

In the end, Robin realizes that money is a vice and recalls what he had learned from Batman: never squander money again! As Beast Boy worries that they might need to face their responsibilities of squandering Batman's money, Robin asks Alfred if he can kindly clean up the mess before Batman comes home, yet the butler harshly kicks him in the face as a punishment, much to his pain.

The transcript for "Mo' Money' Mo' Problems" can be found here.