But will you still love me when I, Mojo Jojo, create an army of cybernetically enhanced battle monkeys?!?

Mojo Jojo is a super-intelligent modified chimpanzee and a major enemy of the Powerpuff Girls. He enters the Teen Titans' dimension in an attempt to take it over with an army of monkeys and killer robots.

In "TTG v PPG", he enters the Titans' home in Jump City, planning to create his evil monkey army to take over the world. He enters Titans Tower and first discovered Beast Boy and Cyborg and assumed they were superheroes just by looking at their appearances and clothing choices.

Mojo Jojo is a green chimpanzee with dark hair, with a metal, white and purple turban, purple tunic and cape, with white gloves and boots. He also has green eyes.

Mojo is an ego-stricken and violent criminal, willing to do whatever it takes to achieve his goals. Due to his ego, though, he often oversees the flaws in his plans, leading to his downfall. He does have a soft-side, however, caring for his dog, and one of his plans involved stealing the perfect birthday present for his unseen mother. He is also shown to be good with cooking. 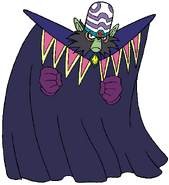 2016 Design
Add a photo to this gallery