"The Power of Shrimps" 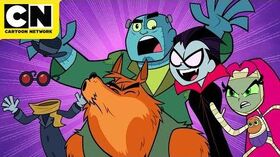 The Titans want to be the scariest trick-or-treaters in town, so Raven casts a spell to turn them into real monsters.

The episode starts when the Teen Titans are watching the sun go down by the window...waiting for Halloween to begin, and as soon as the sun goes down, they cheer. Robin then announces that it is now Halloween, but they are confused as to what they want to dress up as.

They last recall that one Halloween where they dressed up in childish costumes such as a witch and a clown, and got rejected. Then Cyborg comes in with a box filled with cheap plastic costumes of scary monsters. As a result, they become greatly depressed, since they dread of ending up trick or treating without a costume. To avoid themselves going naked, Raven then had an idea, which is to cast a spell to turn all of themselves into real monsters.

After the spell is complete, it has turned all of the Titans into some of the most popular monsters of the century: Cyborg into Frankenstein (nicknaming himself Karl) Beast Boy into a werewolf, Robin a vampire, Starfire a mummy (which she mistakes for "mommy"), Raven the invisible woman and Robin as Dracula. She scares her fellow monster friends in utter pain. Suddenly, all of the monster Titans fight to see who is the most scary by showing off their claws and fangs until Starfire who thinks she is the scariest shouts "BOO!", but isn’t scared anymore. Now that they're in their scary attire, Robin then proclaims that it's time to scare some kids! He then shouts his catchphrase with a scary twist, and all of the Titans flew out of the window with a corresponding "blah blah blah" from Robin.

In the streets of Jump City, the new and improved Titan monsters sashay and scare all of the citizens of their city, rapping their national scary anthem (with Robin and Raven literally slaying). After their big scary meeting, Robin announces that it has come to a conclusion that they're now the scariest trick or treaters in Jump City all thanks to their friend Raven (followed with a 'blah blah blah'). They all cheer with glee until the Titans hear a rumble coming from the Tower. Raven's cauldron is actually shaking and unexpected visitors have preached, stealing the show on horrifying all the innocent kids.

Perceiving the severity of the situation, Raven tells the others about the warning that she said earlier about the "ghost-pocalypse", though Cyborg claims that Raven did not say anything about the "ghost-pocalypse", so Raven argues that she was trying to be spooky. Robin then sides with Raven, saying that if they cannot stop the ghosts, they will scare everyone in Jump City forever. So they try their only way which is with their monster forms, but they still succumb to their fears and retreat. Robin says that it wasn't working, and Raven agreed by remarking that they are not meant to be monsters anyway. However, Starfire has a brilliant plan: “Why not use their old "cheap" looking costumes from the dollar store to scare the ghosts away?”

The Titans manage to scare the ghosts with their adorableness. To retaliate the Titans, a huge form of the ghosts attempt to frighten them, only for the Titans to prevail. At last, without their boos and hoos, the Titans are ready to enjoy their Halloween; even if they aren't so "scary", they still are the most adorable trick or treaters in Jump City. Soon, they steal all of the candy from a doorstep and have a complete sugar rush for the rest of Halloween.

The transcript for "Monster Squad" can be found here.