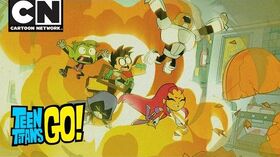 The Titans have a hard time deciding who gets to choose which movie they watch on movie night. But things get different when their competitiveness breaks their plasma TV.

The episode starts with Beast Boy walking and dancing into the living room feeling excited, singing a little tune to himself, and getting ready to watch his movie of choice. His happiness is short-lived as the other Titans walk in, singing the same tune Beast Boy was singing, getting ready for their movie night as well. As soon as Beast Boy and the rest of the Titans hear each other singing happily about their movie night, they all pause.

Cyborg says it was his turn to pick the movie, but Robin says he was wrong and that it was his turn. Raven cuts in and tells Robin it was her turn to choose, but Beast Boy says it was not, and Starfire says they are all misguided and tells them it was indeed her turn since she says it has been 3 weeks since she chose last. Starfire then says they will be watching her movie of choice titled Frightmare Circus 3, which is about a hungry clown having a hard time catching his meals because they are always running away. Cyborg cuts in and says they will be watching his movie, which is something with action, lasers, and explosions! A movie titled Bomb Hackers. Raven is not impressed by this and tells them they should watch a mystery movie called Knock Knock, You're Guilty!, which is a mystery film about a detective. Robin cuts in and said they should watch something western, Saddle Dance. About cowboys, justice, guns, and romance. Beast Boy gets annoyed and says they will be watching his movie, which is a movie case that simply says "B.B's Movie" in large red printed letters.

As soon as Beast Boy is about to put his movie in, Raven, Robin, Starfire tackles him to the floor while Cyborg gets a grip on the TV. Beast Boy transforms into a gorilla and joins in on Cyborg by grabbing hold of the TV as well. Robin interrupts and tells them to stop and says movie night should be about togetherness, and Beast Boy agrees and puts the TV back onto the wall and says they should all talk it through.

The TV then falls off the wall, getting damaged. Raven asks Beast Boy what he has done, and Beast Boy tells them not to panic. Robin cries that movie night has ruined! Starfire then confirms the movie night is not ruined if they obtain the second TV. Cyborg questions about having another TV, and Starfire says it's in the basement and clears up it was the one they received after beating Control Freak. Then it shows a flashback of Control Freak, minding his own business, carrying a brand new TV he bought, not stolen. Robin, who thought Control Freak was up to no good, hit him repeatedly with his staff and then took off with the newly bought television that he thought was "stolen," foiling Control Freak's "evil plan" and leaving him to lay on the ground in pain.

The next scene shows the Titans in the basement, looking for the other TV. Cyborg comments he hates being in the basement. Starfire agrees and says it's abandoned. The Titans all jump in fear once something startles them, but it turns out to be a black cat. Moving on, they walk down the long hallway that leads to several doors. Robin says the TV must be in one of them, and he opens one door that led to a room with a ton of sharp meat hooks. They gasp in fear, but Cyborg says it was just his meat locker and that he was going to barbecue them later, and he turns on the light to reveal the several hotdogs he has in the room. Starfire opens another door, and it looked like it had several red glowing eyes staring back. Beast Boy becomes frightened and begs her to turn on the light. The light is turned on and revealed a ton of dolls, though Beast Boy is still frightened and begs them to turn off the lights. Starfire asks who they belong to, and Robin says it is his creepy doll collection. Cyborg says the TV has to be in the last door, and it turned out it is, but it is guarded by the demon Ted, whom Raven trapped down there years ago. Raven gives the demon a chin rub while Beast Boy obtains the TV and quickly runs outside the door.

However, just as the Titans prepare to watch their movie, the television shows nothing but snowflakes. Cyborg then finds out that there are tangles of cables behind it, and after the five all panic, he orders Beast Boy to cut the red wire. At first, Beast Boy isn't confident and cuts the wrong wire, but still gives it his all. Still, there are no signs of signal for the television, so Raven suggests investigating in a mystery crime montage and begins interrogating her friends, only to turn out that she wants to steal the remote and she gets into a fisticuffs with Beast Boy. But things change into an old west and then a kung fu montage when the five decide to all fight over the remote, which they end up accidentally destroyed. Although Beast Boy manages to find the buttons that switch the television to color mode, they soon begin to worry about popcorn and decide to make popcorn in the microwave.

Unfortunately, as they are waiting for their popcorn, the corn can't withstand the heat thanks to Beast Boy's miscalculation and starts shooting popcorns as bullets, much to the Titans' horror. The five try to hide from the pelting kernels behind the broken table, and Beast Boy moans that he wants to go home to his mama until he sees Raven. After the boys' side is attacked by a toaster, Robin commands the other Titans to charge. During this fight against the kernels, Beast Boy is the only survivor as one by one Robin, Starfire, Raven and Cyborg have been hit and injured. With much determination, Beast Boy switches off the microwave and cheers, but the microwaves explodes anyway.

After the whole ordeal, the four other Titans, who are severely injured, give in and let Beast Boy show his movie. But in the end, The Titans' movie night is ruined when Beast Boy puts on his movie, which isn't a movie at all. Instead it is a music video of himself singing the Movie Night Song. Everybody groans while Raven says that they are going to play board games next week.

The transcript for "Movie Night" can be found here.