My Name is Jose

My Name is Jose

"The Power of Shrimps" 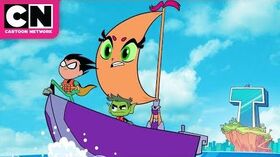 The Titans have Raven give them new super powers but have a hard time adjusting.

Robin, Starfire, Cyborg and Beast Boy are having fun playing Superman, pretending to fly over "buildings" (actually a pile of boxed pizzas) and shooting laser beams like how Superman does. Despite what the other Titans just said, Raven comes into the room and begins to realize that the other Titans want to be like the A-List hero Superman, which they claim that his superpowers are the best, but she is annoyed by their dissatisfaction. Raven clarifies that they already are heroes and have cool powers. She starts telling the others their good super qualities to convince them to accept themselves: Cyborg is a half-robot guy who can detach himself, Starfire can shoot laser beams with her eyes, Beast Boy can transform into any animal in the world and Robin has the most fantastic hair (he doesn't have any superpowers...but he is a super friend). However, The Titans quickly complain about their powers being "lame" and ask Raven for some new powers. By saying her signature mantra, "Azarath Metrion Zinthos," she casts a spell that gives the Titans new superpowers. Robin begins to state that nothing has changed and that they look the same. Raven says that they didn't change their costumes since she has bestowed their new powers.

Wanting to try out his new powers of being Aqualad, Cyborg detaches his head and throws it into the water. After being bored by a random fish who greets him with "My name is Jose," Cyborg beefs that he needs to get into a bathtub. Robin then asks if he can fly but realizes he inadvertently break-dancing the night away and ends up falling outside the tower. As Beast Boy questions why he is thinking hard thoughts, he begins wailing because he can only "think" about eating a burrito. Starfire is puzzled about why she is making the stretches; she then starts to stretch her arm around the to ut since she hasn't fully mastered her newfound ability, it suddenly slingshots back, causing her, Beast Boy and Robin, to tangle up in a heap. When her friends once again grumble about how their new powers are lame, Raven, who has now gained Superman's powers, replies that they need more "advanced" skills to realize that their original powers are better and brags her new abilities, which makes Starfire and Beast Boy enviously cry. Nevertheless, after Robin encourages his remaining friends to practice and finds out their power's values, the three follow his inspiring suggestion. Scenes begin switching between the progress of Robin break dancing in an alleyway, Beast Boy avoiding the dangers in the streets of Jump City, Starfire transforming into objects with her stretches, and Cyborg having fun with the fish, Jose.

After a long day of the four other Titans testing out their new powers, Raven (now having the ability to be Superman) returns to the living room and asks the Titans how their new powers are turning out. She confidently believing her friends will hate them and plead with her to revert everything to normal. Instead, her friends appreciate and have embraced their capabilities, even using them as their actual powers, much to her astonishment. When the Crime Alert rings, the Titans realize that Gizmo and his robot army are attacking from a floating fortress, and they immediately sails to the rescue. Gizmo seems to have perceived how the Titans have changed their powers and mock them for it, and Raven decides to show off being Superman. Unfortunately, before she can do so, she overlooks Beast Boy's advice and her new weakness to Kryptonite, which leads to herself getting blasted with Gizmo's Kryptonite ray. Weakened, Raven tells her four friends that she can't give them their powers back and faints soon after.

Despite being stuck in a dire situation, Robin makes an encouraging speech for the rest of the team that they may have dumb powers, but with optimism, they can still use them to defeat Gizmo. Starfire offers to slingshot Robin and sends the latter flying, his silhouette rising before his own eyes. After landing in the fortress, he busts out some awesome dance moves with great heroism, describing that such moves wouldn't be called break dancing for anything, which stuns Gizmo. With his robots now defeated and the fortress being blown up, Gizmo then tries to row back to safety via his lifeboat but is taken down by Jose and a school of fierce piranha. Although Starfire intends to stretch him to prison, she accidentally flings him into outer space, and poor Gizmo is going to get sizzled in the Sun.

Back at the tower, Raven regrets being Superman and decides to give her friends' initial powers back. But they like the new powers, owing to how they have gotten lucky this time. When Raven questions them what are the chances that their "lame" powers can be put into good use, Beast Boy senses that there's trouble underwater. A group of electric eels, who participate in an underwater dance competition, are about to battle, and some of the audience can't reach for the phone to call for help. Raven thinks it's stupid, yet she remembers that she and the others have learned that no matter what powers they have, there will be a situation where their powers will become effective, thanks to Robin's reminder. Agreeing with her friends, she jumps out of the tower again with the rest of the team, this time with the assistance of their new powers and Jose who joins in while introducing himself to the viewers.

The transcript for "My Name is Jose" can be found here.