Nostalgia is Not a Substitute for an Actual Story

Nostalgia is Not a Substitute for an Actual Story

"Slapping Butts and Celebrating for No Reason" 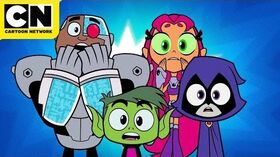 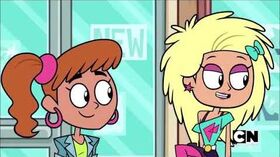 "Nostalgia is Not a Substitute for an Actual Story" is the nineteenth episode of the fifth season of Teen Titans Go!, and the two-hundredth-twenty-eighth overall episode of the series.

The Titans time travel back to the 1980s to determine whether or not it was the best decade ever.

We're back at it again...Cyborg talking about the 1980s! While watching the show Unusual Stuff that is playing on their TV, Cyborg starts to describe the animation style, and how it looks like it was made in the 1980s. Robin on the other hand, calls the show "terrible" and turns off the TV. Then he goes on to say that the 1980s wasn't "that great". This gets Cyborg all worked up, and him and Robin have an argument. Cyborg talks about the pros of the 1980s, while Robin talks about the cons of the 1980s. They settle this argument by Robin making a bet. Robin says that if Cyborg can buy an album, then Robin will take back what he said about the 1980s and admit that it is the best decade ever. Raven then says "Azarath, Metrion, Zinthos" and the spell is cast for the Titans to travel back into the 1980s.

After Raven finishes casting the spell, the Titans and Tower look awfully different. The style of the Titans' clothes and hairstyle look different, and so does the Tower. The Titans are checking each other out, as they have never seen the 1980s dress style like this before in person.

The Titans plan their trip to the mall shortly after, only to find out that phone service isn't available. Cyborg reminds them that bikes are the most iconic way of getting to one place to another. After the Titans hop on the bikes they start doing wheelies, and other bike tricks. Robin reminds Cyborg that him and the other Titans are going to the mall. Cyborg asks the "where is that mall?", and Raven attempts to go on her Communicator for directions. Unfortunately, once again, there are no cellphone signals in the 1980s. Cyborg then reminds the Titans that they've still got the map. After grabbing the map out, Cyborg is unable to unravel the map, so he gets frustrated and crumples the map and throws it away. Starfire questions, "How will we know which of the roads to take?" Cyborg responds with, "Where we're going, we don't need roads." The Titans take a shortcut through a downhill forest, and end up crashing into the mall. They get hurt in the process, but they have arrived at their destination.

The Titans start observing the mall and what it had to offer. While checking out the mall, these two girls are spotted next to the Titans. One of them says "I would, like, totally kill for that girl's hair." Starfire hears them, and since she doesn't understand the 1980s slang, she interrogates the two girls. Raven interrupts Starfire to explain that those girls wouldn't really 'kill for hair', so when Starfire finally understands, she returns the compliments to the girls, "I would gladly destroy your bloodline and take your lovely eyes for my own."

The Titans are still on the search for the record store, and Cyborg eventually finds it. The Titans are amazed of the store, and they see lots and lots of records everywhere. Beast Boy encourages Cyborg to find his album but Cyborg doesn't know how to due to not knowing how to search for records in the 1980s. Eventually, Cyborg finds his album by the looks of the album cover. Cyborg tells Robin that he completed his mission into getting his album in the 1980s and wants him to finally admit that the 1980s were the best, but Robin reminds him that the worst part of the 1980s are the Jerks. They are spotted behind the Titans. They interrogate the Titans and then they steal Cyborg's album. Cyborg gets back his album by tricking them into thinking something's at the shelf. He then tells the Titans to run.

The Titans hop on their bikes and start running away from the mall, as the '80s Jerks get on their own bikes and start chasing the Titans. The '80s Jerks chase the Titans throughout the neighborhood. Starfire and Raven are concerned that the '80s Jerks will catch up to the Titans soon. Cyborg says once again, "Roads? Where we're going, we don't need roads!" Robin recalls the last result of going down a downhill forest, but Cyborg insists that Robin and the other Titans follow him.

At the start of going downhill, it doesn't look so good. The Titans looks like they're going to crash into something again just like last time. Luckily, there is a huge mountain edge for the Titans to fly off of (E.T. reference!) The Titans glided off, whilst the '80s Jerks fell into a mud pit. While in the air, Beast Boy asks how they're flying in the air with bikes. Raven responds that they're superheroes, Robin says that he can't and he falls with the bike.

Back at the Tower, the Titans are seen to be chilling on the couch while playing some music through a disk (although, Robin has casts all over his body due to the fall.) He finally admits the 1980s was the best decade. The ending consists of the credits displaying like how it would be in the 1980s.

The transcript for "Nostalgia is Not a Substitute for an Actual Story" can be found here.