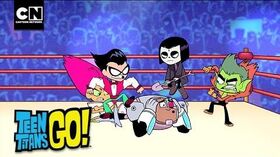 Cyborg tells the other Titans that pro wrestling on TV is fake and tries to teach them about real wrestling.

The episode starts with the Titans (except for Cyborg) watching wrestling on TV. Robin says that there is no way that one of them will get up, and Cyborg is right. His body slams the other wrestler making the Titans sure he will not get up. Cyborg, however, is sure he will, and he is surely correct enough. Starfire wonders if he is a psychic, but he tells her he knows because wrestling is super fake. She questions it but is again reassured by Cyborg that wrestling is super fake. Raven asks why Cyborg has to ruin this for them, and Beast Boy asks what he has against wrestling. Cyborg says he likes wrestling but real wrestling. Then he says he can teach them the real way and says it has the cool costumes and sweet moves of fake wrestling, but none of the ridiculousness.

The scene then goes to the Titans all dressed in singlets and headgear. Cyborg says they look cool, but Raven thinks otherwise, Starfire thinks it's old man underwear, and Beast Boy thinks it's too tight. Robin, however, thinks it's snug in all the right places. Beast Boy then asks when he can come off the top rope on someone, but Cyborg says there is no rope or ring only a mat. He then says that it will teach morals and self-confidence, but Beast Boy insists he doesn't want these things. Cyborg puts the other Titans in position while Beast Boy and Raven blush and smile awkwardly at each other while Robin and Starfire start wrestling. Starfire complains it feels like a hug and asks to fake choke someone out, but Cyborg insists no choke outs, pile drivers, flying elbows, and any other non-sportsmanship-like behavior. Raven gets mad, and Cyborg says that there is no crazy drama in real wrestling and dodges the chair she throws at him. He also says no yelling, and the other titans say that yelling is the best part.

Robin then says that they will become pro wrestlers, and they all introduce that they were asters, aka The Deadly Dandy, The Wild Man, and The Yeller and The Grave Mistake. Cyborg, still trying to teach them about real wrestling, says that he is Victor Stone and is happy to be here. The other Titans work on their crazy talk with Beast Boy aka Wild Man giving a crazy and non-understandable speech which they applauded then "wrestle" (keeping three feet between them, of course), and Cyborg says it's fake. To prove it real, the Titans all perform their special moves (which do no real bodily harm), and Cyborg is still unimpressed.

The next morning, Beast Boy (still dressed as The Wild Man) sets the toaster on, and The Yeller comes in and, liking the smell, tries to eat it. The Dastardly Dandy comes in, and Cyborg asks them to stop screaming. The Grave Mistake says that the screams will stop when she puts him Six feet Und...but Cyborg cuts her off and tells them that they have become too melodramatic, but in the process spills coffee on the Dandy who gets mad. Cyborg then tells them that he challenges them to a battle royal.

Then we see all the Titans except for Cyborg ready to fight in a big arena. Then Cyborg shows up and gives a moving speech, and Beast Boy decides to join him but quickly double-crosses him. The Titans quickly attack and cream Cyborg, but he quickly realizes that he isn't hurt but was caught up in the drama. He then calls upon discipline and self-confidence to win, and he does easily.

In the end, Cyborg takes the championship belt and tells all the kids to eat their vegetables and drink their almond milk, but is soon knocked out by Raven with a chair.

The transcript for "Oh Yeah!" can be found here.