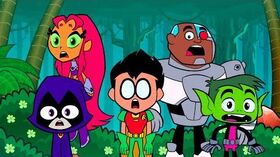 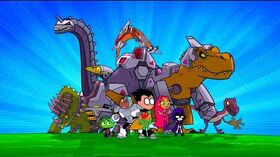 Still shipwrecked on a deserted island, the Titans try to find food but stumble upon dinosaurs instead.

The episode begins with Robin serving his team a feast of coconuts trying to make the most of the only food source they have. But this doesn't go very far as the team quickly grow tired of the food very quickly. Raven then suggests that they go to the other side of the island to find a new source of food and Starfire sings an annoying song about the other side. Once finished they search the island for a new source of food.

Once they reached the other side of the island, they saw a group of dinosaurs roaming in the distance. But the Titans completely overlook them as they found a group of potatoes in the ground. They immediately devour the potato patch and then turn around to see the dinosaurs. Robin states that they have the option to either force the animals into an amusement park or make them their pets. But the group agrees to make the dinosaurs pets as an amusement park is too much trouble. From there the group claims their own dino while each of them lists facts about their dinosaur. After picking their pets they fight over which is more powerful and which has the best qualities. So Robin suggests that they make them fight to see who the best is and Raven suggests that they train them first.

After their training Raven suggests that they fit the dinos with battle-armor. Starfire then remarks how convenient it was to make the armor with only the island's natural resources. While the other dinos fight, Robin tries to get his Velociraptor to open the door of a hut. Just as the others are about to win over the Brontosaurus, the other dinos decide to revolt against the Titans. Robin deduces that they must hide in a door in order to evade their attack. After entering a hut, Robin refuses to lock the door as he assumes that the dinos wouldn't even know how to open it in the first place. But Robin's Velociraptor finally manages to open the door and the T-Rex uses its robotic arms to snatch them from within the house and drag them outside to attack them. The Velociraptor then closes the door dramaticly ending the episode.

The transcript for "Open Door Policy" can be found here.