Teen Titans Go! Wiki
Register
Don't have an account?
Sign In
Advertisement
in: Season 4, Season 4 Episodes, Episodes focusing on all Titans,
and 5 more 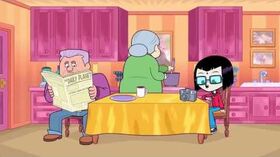 The Titans each tell their own slightly inaccurate origin stories.

It all begins when Robin breaks the door and is going to tell his story. Cyborg happily says that he loves stories. Robin tells him that it's an origin story, which Beast Boy mishears as orange. As soon as Robin tells his origin story about him as a circus clown, the other Titans stop him due to their being bored.

Raven tells her inaccurate origin story. She was a teen photographer taking photos of a science lab when she got bitten by a radioactive raven. She turns into Raven-Woman and gains a series of raven-related powers: winged flight, egg-laying, and nest making. Her tragedy is that her elderly uncle died...decades later of old age. All the Titans except Robin cry. Robin tells Raven that it wasn't real, as she stole the origin from Spider-Man.

Cyborg tells his inaccurate story about him escaping a terrible explosion that blew up his homeworld and killed his parents. Then he lived on a farm with step-parents who had always wanted a child. He finds he has superpowers and becomes Cyborg-Man. His tragedy is that his step-parents fell on hard times, lost their farm, and were now homeless. And yet again, all the Titans except Robin cry. Robin tells Cyborg that it was Superman's origin.

Starfire tells her inaccurate origin story about her younger self walking home from the movies with her cats. As they walk into an alley, a dog scares her and the cats, chasing them away, which causes Starfire to become depressed. Starfire takes the vast fortune left by her cats to build a headquarters in a cave and becomes the superhero Catfire, who fights bad dogs. Her tragedy is that her back was broken by Bane-Dog. Robin tells her that it was Batman's origin story, except she was Batman and all the characters were replaced by cats and dogs.

Beast Boy tells his inaccurate story about being a jet pilot known as the "man without fear". One night, while marooned on a desert island after jumping from a crashing plane, a dying green alien gave Beast Boy a green power ring. Beast Boy then used his powers to fight a series of bad guys (like the Red Lanterns and Dr. Hector Hammond). This time, the Titans, especially Robin, didn't cry. Robin tells Beast Boy that it was more like Green Lantern's story. Beast Boy says that he is a Green Lantern, explaining why he's green and can change form.

Robin then tried to remember and retell Beast Boy's real origin story: about how he was ill as a child and that his scientist parents gave him an experimental serum created from the blood of a rare green monkey. It not only cured him but granted him shape-shifting powers. Beast Boy points out how silly that is, so he and the other Titans laugh at Robin. Beast Boy then eventually reveals he's not real and that he's just a hologram created by Green Lantern, causing everybody (except Robin, who is more surprised than sad) to cry, especially Cyborg, upon realizing his friendship with Beast Boy was a lie. The episode ends with Green Lantern laughing.

The transcript for "Orangins" can be found here.