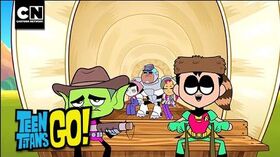 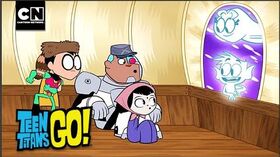 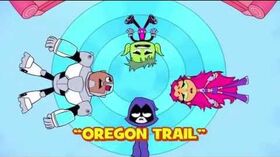 Robin forces the others into an 1800s style adventure, complete with covered wagons, attacks from the elements, and dysentery! Yay?

Raven, Starfire, Beast Boy, and Cyborg are gathered in the living room, complaining about the heat and dreading a walk to turn on the air conditioner. Cyborg cries out for help and Robin crashes through the window to ask about their problem. However, when they tell him that they don't want to walk to the air conditioner, he tells them that, in the past, people were strong and self-reliant as they lacked technology. He decides to take them on a road trip through the Oregon Trail to teach them self-reliance. Raven asks if they're in Oregon, but Robin says the trip is 2,000 miles long, which Beast Boy complains will take days. Raven says she'll meet them there and enters a portal, but Robin yanks her out and informs them it will take months as there were no cars or magic portals. The Titans begin to complain, but Robin says he loves their enthusiasm.

The Titans gather around a trading post, where Robin says their educational adventure begins. He asks if they will like to look around when a box displaying the question appears along with two choices: Y or N. The Titans are surprised, and he explains that the Y means Yes and the N means No. Raven and Beast Boy berate him for shortening short words though Robin asks Y or N. The Titans choose N, and Robin tries to get them to change their mind, but they repeat N. He sighs and tells them to get on the wagon where Starfire is mesmerized by a bull she names Hughead. Robin tells her not to get attached as they'll most likely end up eating him. Raven refuses to ride in the wagon, but Robin ties her up with his grappling hook wire and throws her inside. Beast Boy calls shotgun, and Robin hands him a shotgun to use in case they encounter danger.

Robin compliments the Titans' journey as they have warm weather, a good pace, and are in good health though Beast Boy vomits. Cyborg complains about the lack of education, and Starfire sums up their trip as boring, monotonous, and repetitive, which Robin says perfectly summarizes the Oregon Trail. Beast Boy says he wants to go home and play video games, but falls off the wagon and breaks his leg. Robin asks the Titans if they would like to continue on the trail though Cyborg interrupts as they have to heal Beast Boy. Robin tells him to let him finish and asks if they will like to check supplies, look at a map, change pace, or change rations. Raven says they don't need any of these options as they need an ambulance though Robin says the pioneers didn't have ambulances. He presents the sixth choice: stop to rest, which Cyborg chooses. Robin asks for confirmation on their choice, and the Titans shout Y. That night, Starfire fixes Beast Boy's leg, and Robin asks if he wants to share what he learned. Beast Boy cries that he wants to go home, but Robin says they have lost time and proceeds to list more numbered options. Beast Boy says he wants to rest, but Robin tells him a pioneer wouldn't call it that, and he chooses option six. Robin says he already chose option one and that they have to make it to Oregon before winter or they'll not make it at all.

Robin summarizes that the weather has become cold, the Titans' health is fair, and the pace is steady though Cyborg complains that it is the worst experience of his life. Robin says Cyborg has to put himself in the shoes of a pioneer but says that a thief has stolen his shoes. Raven complains that they're hungry, and Starfire says Hughead looks delicious. Robin decides to four - check supplies - and notes that they are out of rations. Starfire says they'll eat Hughead, but Robin reminds her they need him to pull the cart. He tells the Titans there's only one option when they run out of food, and Raven proceeds to order a pizza on her phone. He claims they have to go hunting and gathers the Titans around a herd of buffalo. Robin tells Beast Boy to shoot one, but he refuses as he's a vegetarian. Robin proceeds to shoot buffalo, squirrels, and deer but laments that they can only carry 100 pounds. Raven asks why he shot so many animals, and he says it's because it was the only fun part of a boring, but an educational journey.

The Titans are eating buffalo when Robin announces that he has two pieces of bad news. The first is that Beast Boy was bitten by a rattlesnake. The second is that Beast Boy has dysentery; Raven explains this means he'll poop till he croaks. Robin asks the rest of the Titans if they'd like to look around, though Starfire asks if they should be helping him. Robin states that Beast Boy has died, shocking the Titans as he didn't tell them that people would die. Robin says that on the Oregon Trail, it's super boring, you hunt for a little, and everyone in the party dies. Raven asks about learning, and Robin responds that they'll learn they're going to die. Cyborg mourns Beast Boy's death, though he comes back as a ghost and says he feels good. Raven says she wishes she was a ghost, and Beast Boy tells her to get dysentery. He tells Robin that his animal friends aren't happy with him, and the ghosts of a bear, squirrel, and deer growl at him.

The Titans continue their journey during winter and say the pace is slow and health is poor. Cyborg says it can't get any worst though Robin reports that Starfire has died. Behind the wagon, Starfire and Beast Boy celebrate their status as ghosts though Robin tells Cyborg and Raven to ignore them and focus on learning about the hardships of being a pioneer. Beast Boy interjects and says they don't have to learn as ghosts. It begins raining, and Raven and Cyborg eventually die of measles and a cold, respectively. Robin is forced to eat Hughead and pulls the bandwagon by himself along with the Titans, and Hughead, as ghosts, celebrate.

Robin arrives at the Dalles River and asks himself if he would like to look around and chooses Y. Beast Boy teases Robin, but Robin says that once he floats the bandwagon through the Dalles River, he'll be in Oregon. The deceased Titans and animals, however, celebrate on their ghost yacht. Robin resolves to cross into Oregon, but the raft he builds for the wagon falls off a waterfall. He crash-lands before the Oregon border and celebrates his accomplishment as the ghost Titans appear behind him. Starfire asks Robin what he learned from the boring journey, and he discovers he has dysentery, killing him offscreen.

The transcript for "Oregon Trail" can be found here.