Other side of the galaxy

It's a cape for your brain, dumb-dumb!

Parry is an alien parasite who appeared in Parasite.

While gathering creatures on Tamaran for her Feast Day, Starfire was attacked by a one-eyed, tentacle monster. She was pricked in the side by it, so she blasted it to ashes with her eyebeams. That evening, after the other Titans had rejected her Feast Day festivities, the sore started to throb violently, and she can somehow communicated with it.

The next day, all of the Titans were disturbed by the parasitic infection, especially Robin. She explained that it was no big deal- it's just Parry. Starfire said she can communicate with Parry by using her brain, but the Titans said that it's just creepy and not normal. Robin decided to do some research and found that Parry can't talk and that he's dangerous.

Raven, Beast Boy, and Cyborg grew to like Parry, and they were listening to one of his stories. Robin barged into the living room and explained that they had to get rid of the parasite right away, but Starfire refused... later that night, Robin secretly entered into Starfire's room equipped with a buzz saw to try to amputate it, but he was suddenly sucked into his own consciousness somehow.

Inside his brain, he talked with Parry. Robin was amazed that he could talk, so he felt bad for being so mean. Parry was pretty cool about it though, and he gave a cape to Robin's brain as a gift.

Parry decided to leave the Titans, and when all of them are gathered at the top of the Titans Tower, he floated away. Suddenly, he became enlarged and morphed into a giant alien spider, and they were all sucked into a portal to the other side of the galaxy. Robin had predicted this would happen and, after he did a bragging dance, Parry crushed them all with his giant pincher. 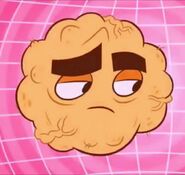 Add a photo to this gallery
Retrieved from "https://teen-titans-go.fandom.com/wiki/Parry?oldid=421067"
Community content is available under CC-BY-SA unless otherwise noted.