We all know the Teen Titans are great at throwing "hat parties" and "meatball parties"...but can they throw a regular ol' "party party"? Don't miss who's on the guess list!

Cyborg is wondering what they could do today. He thinks of a waffle party, syrup party, butter party, and a plate party. None of the ideas work. Raven says why don't you just throw a regular party. Starfire invites the guest and is in charge of the guest list, Cyborg and Beast Boy are in charge of entertaniment, and Raven will be in charge of food and Robin is in charge of decoratoins.

After setting up, they hear the doorbell ring. Gizmo, Killer Moth, Jinx, Terra, and a lot more come in. Starfire says that she invited all of these people because they were on the most wanted list. A few minutes later the villains get bored and leave complaining. Beast Boy and Cyborg leave with them complaining the party was terrible. Then Starfire thinks of dancing and everyone stays. They dance, do limbo, and eat bzorkels (well only Starfire). Raven asks if they can kick them out, and Robin agrees. He yells get it, but nobody listens. Raven then turns into an evil demon and screams and throws people out.

The Titans then sit on their couch thinking what are we going to do now. They all glance at the leftovers, and yell "LEFTOVER PARTY!". 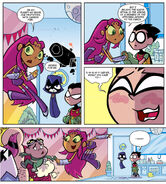 Add a photo to this gallery
Retrieved from "https://teen-titans-go.fandom.com/wiki/Party,_Party!?oldid=383039"
Community content is available under CC-BY-SA unless otherwise noted.