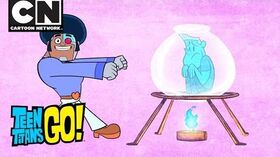 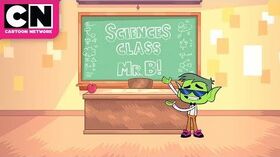 "Permanent Record" is the fourteenth episode in the fourth season of Teen Titans Go!, and the one-hundred-seventy-first overall episode of the series.

It's back to school as Robin becomes a teacher who forces the other Titans into a classroom, where they each teach a certain subject and try to avoid getting check marks on their permanent records.

Cyborg, Raven, Beast Boy, and Starfire watch a sock-puppet action movie with bated breath when Robin, dressed like a professor, appears unexpectedly with an alarm. Raven asks what the mustache Robin has is all about, and Cyborg figures it's Mustache Monday! Raven goes with a handlebar mustache, Starfire chooses the Fu Man Chu, Cyborg goes imperial, and Beast Boy selects a ridiculous "freestyle mustache." Robin finally loses his temper and screeches at the other Titans about how it is not Mustache Monday. The Titans then comment on how his "Chevron" says otherwise. Robin then proclaims how his mustache represents authority, and that he is a teacher, with the Titans being his students. The Titans are sucked up by tubes and land up in a classroom.

The four Titans start to complain, but Robin says they all need important life skills. After they ignore him, Robin threatens them with checkmarks for bad behavior that go on their permanent records. Beast Boy remembers how his cousin now lives in a dumpster because of having four checks, so they all agree to stay (Cyborg angrily mutters, though). Robin says teaching is hard, but Beast Boy thinks he's being bogus. He says he can do his job, and Robin, who was just joking around with him about teaching, has now become the student.

Beast Boy kicks Robin back into his former seat and starts his science lecture. He can't even tie his shoes, as Robin points out, but Beast Boy wears Velcro anyway. The Titans propose scientific questions, and the "Mr. B" eventually settles on Starfire's question: "Why is the sky blue?" Rob answers that it's the oceanic reflection, but Beast Boy responds with a blow horn of wrongness. Beast Boy summons the "Magic Learnin' Van" to go on a field trip. Robin points out there's no magic in science, but Beast Boy kicks him inside the bus.

Crashing through the Titans Tower, the class heads into outer space, and they're stuck in awe. Mr. B gets out in an astronaut suit and explains Starfire's question. But, the sun blows out a multi-colored light, of which the innermost color is blue. The rainbow edge then becomes friends with the gas particles, and so Beast Boy concludes that this is why the sky is blue! Robin claims this is total nonsense, but Raven and Starfire seem to understand. Cyborg then inquires why the sky is sometimes red and orange, so Mr. B explains that when the sun goes down, the blues leave, and red and orange then become bros with the atmosphere. Robin declares this to be total baloney, and for this interruption, he receives a check from Mr. B.

Back in the classroom, Beast Boy and the other Titans roast Robin for getting a mark "on ya permanent record." Robin points out that it's 'your' not 'ya,' and mocks Mr. B for not even knowing grammar. Starfire grabs the chalk and jumps at the opportunity to teach grammar. Robin nicely objects, noting that she's not qualified to teach grammar, but Starfire reminds him about how she doesn't like giving checks, but if she "must, she will."

Ms. Starfire, now in a purple teacher's school dress, begins to teach how to use the word "the" properly. She gives the sentence "I'm filled with feeling of happiness," and asks where they should insert "the." Robin sighs, saying it's not needed, but the other Titans add a "the" after every word. Robin complains that it's not even understandable. So the other Titans scold him using "the" repeatedly to punch him in the face (breaking the 4th wall...) Robin erupts in a blaze of fury. But for that outburst, Ms. Starfire has no choice but to give him "the check of marks." Robin begs for mercy, but he still receives a check.

Trying to cheer him up, Cyborg picks up the chalk to teach chemistry. Dressed in a romantic outfit and speaking in a seductive tone on a chocolate heart, it's clear that Cyborg, or "Dr. Love," as he wants to be called, is talking about love chemistry, not science chemistry. Robin objects to calling him such a name but submits after he is threatened with another check. Dr. Love then begins to sing an R&B/disco (which goes nicely with his afro) song about being in love and having chemistry between people. Eventually, even his heart begins singing. The Titans vibe with Dr. Love, all except for Robin, who gets another check for disruption by Dr. Love.

Severely stressed out, Robin's nerves don't get a break when Raven takes the magic chalk to become a substitute teacher (now dressed in a teacher's gown with her hair in a bun). She assumes the title of "Ms. Raven." She says the Titans can do whatever they want. So Beast Boy, Starfire, and Cyborg go crazy. Robin, however, wants to read his book peacefully. He gets his fourth checkmark from Ms. Raven. Robin is confused as to what this one could be for, and Ms. Raven just gives the lousy excuse of "I don't care, I'm the sub." With four checks under his belt, the Titans all make fun of him, and he screams in fear of the coming future.

30 years later, in a dumpster, a depressed, fat, and middle-aged Robin sits on its pile of trash. Beast Boy's cousin then swims out of the trash, and exclaims, "Permanent record!," before the episode ends with a voice clip of him saying, "Yee-haw!".

The transcript for "Permanent Record" can be found here.