Poison Ivy is a deadly, seductive enemy of Batman who can employ vines and biomass to do her bidding.

Growing up financially well in Seattle, Pamela Isley was trying to earn her degree in biochemistry. The professor of her class took advantage of her timid and naïve demeanor, doing, well, you know what with her. He also used Isley for plant testing experiments. After the plant juices and toxins made Isley a dangerous, plant-empowered metahuman, the professor fled. Apart from plant-wielding abilities, Ivy suffered from violent mood swings; she could be lovely at one moment and then murderous at the next. Eventually, Poison Ivy moved to a new city, Gotham, where she planned to release life-threatening spores across the city. Her plan was thwarted by the silent guardian of Gotham, Batman, and afterwards she was locked away in Arkham.

Near the end of "The Titans Show", Poison Ivy appears at the end with a bunch of other DC villains. Control Freak was so proud of the way the Titans fought that he unleashes a new roster of criminals to fight, including Poison Ivy.

In "Mo' Money Mo' Problems", Poison Ivy appears in a redesigned appearance with her fellow cohorts Joker, Penguin, Riddler and Catwoman to invade the Wayne Manor, and successfully defeats the Titans. However, she and her cohorts are no match against Alfred Pennyworth.

In "Bat Scouts", Poison Ivy is playing chess with Catwoman until Beast Boy cuts off the Arkham Asylum's electricity supply and chase her and her cohorts away with Cyborg and the girl Titans, which gives her the opportunity to wreck havoc in Gotham City. Of course, when Beast Boy, Cyborg and the girl Titans attempt to attack them, she along with Bane, Penguin and Two-Face effortlessly beat the four of them up, sending the four teens into the dumpster. But after the Bat Scout Titans regain morale, she gets beaten up offscreen and is sent back to the asylum with her cohorts thanks to Raven's magic.

Portrayed as a beautiful-yet-evil woman, Poison Ivy has a figure in the shape of an hourglass. She wears forest-green, high-heeled boots that go up to her knees, a green one-piece suit and floral gloves that reach up to her elbows. She also has green eyes, red hair and cherry-red lips. 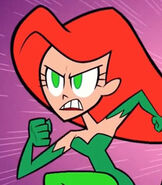 Add a photo to this gallery
Retrieved from "https://teen-titans-go.fandom.com/wiki/Poison_Ivy?oldid=395838"
Community content is available under CC-BY-SA unless otherwise noted.