Pretty Pretty Pegasus Toys are various toys and figurines of the popular television series, Pretty Pretty Pegasus. They are one of the most reoccurring objects in the series. Raven, who is a huge fan of this franchise, is known to own a lot of merchandise from the show, including these. The pink horse with the orange mane and tail is supposed to represent Sparkleface, and the yellow horse with the green mane and tail is supposed to represent Butterbean, as seen in Caramel Apples. Other characters, such as Trigon and Control Freak are also known to own these toys as well.

"You guys are the only thing keeping me sane in this house."

Butterbean and Sparkleface recolored to match Raven and Starfire. 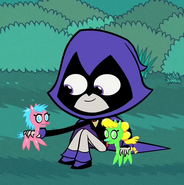 Add a photo to this gallery
Retrieved from "https://teen-titans-go.fandom.com/wiki/Pretty_Pretty_Pegasus_Toys?oldid=386693"
Community content is available under CC-BY-SA unless otherwise noted.