Half human, half demon (clone)

--Purple Raven to Beast Boy in Colors of Raven

Purple Raven is one of Raven's split personalities released by the Mysterious Prism in the episode, "Colors of Raven". She represents her passionate side and she is often seen kissing Beast Boy. She is voiced by Tara Strong.

When Raven was divided by Mysterious Prism, Purple Raven was one of the personality traits that emerged. She is mainly seen kissing Beast Boy, due to the real Raven's crush on him. After escaping Titans Tower, she is seen having a free kisses booth but she is shortly captured by Robin and Starfire.

Purple Raven looks exactly like Raven, but Purple Raven wears a bright purple cloak. She also has purple eyes that are big, shiny and she has large eyelashes, and has hearts as a reflection in her eyes and has a heart buckle on her cloak. She wears pink lipstick as seen when she leaves pink lipstick marks all over Beast Boy's face and his ears after she kisses him. However, the lipstick is mostly not seen throughout the episode.

Robin about to kiss Passionate Raven. 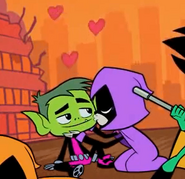 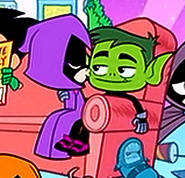 "Lets Take The Purple One,I Like The Way She's Looking At Me"

Add a photo to this gallery
Retrieved from "https://teen-titans-go.fandom.com/wiki/Purple_Raven?oldid=391483"
Community content is available under CC-BY-SA unless otherwise noted.