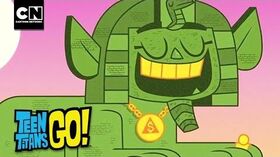 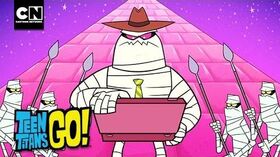 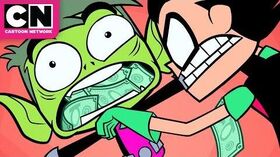 Not being able to buy a present for Cyborg, Beast Boy enlists in a pyramid scheme run by a mummified boss. But when he and the other Titans can't afford to pay up, they're forced into hard labor building pyramids.

The episode starts at when Robin, Raven (who's reading a book), Cyborg, and Starfire are all sitting on the couch. A sad and depressed Beast Boy emerges from behind the couch and slouches next to Starfire. She asks him why he's sad, and the reason is that Beast Boy can't afford an expensive gift for Cyborg's birthday. Raven mentions they have been through this before, and Cyborg also points out that his birthday isn't even close to coming up. Holding each other's hands, Beast Boy tells Starfire if he doesn't give Cyborg an expensive gift, their friendship is going to be ruined, and Beast Boy sulks in sorrow as Starfire greatly comforts him.

Although Cyborg says that it is not even true, Raven says this has definitely happened before. Beast Boy then says that Cyborg loves expensive stuff, but Cyborg tries to remind Beast Boy that the latter was making him look bad. The latter says that he has to get a job to buy him the gift, which the former responses that he doesn't have to. When Robin gestures that Beast Boy has to work at the Pie Shop, Beast Boy denies and gives Robin a pamphlet and say it's a Pyramid Scheme, the Titans confuse this for mummies and Robin explains this to the Titans. Now they get the meaning of such scheme, Robin then says the only way you can make money is hard labor. Beast Boy says labor is for pregnant ladies and criminals and Beast Boy (in dolphin form) leaves and Cyborg yells to give him a card.

Later in the kitchen, Beast Boy is eating a “cash salad”, which is a bowl of money, Robin then crashes through the window and attacks him for the money. The others see this and ask what is he doing to Beast Boy. Robin then says he refuses to see money getting wasted. Cyborg asks if it was good, Beast Boy says no and has more money he can spend and explains this in a song, and the others praise him except Robin. The expensive gift that Cyborg gets is a gold crown, much for his and Starfire's amusement. Raven asks where does he get all the cash, and he says it's the Pyramid Scheme he has signed up, and he's now a “Money Sheriff”. Starfire asks what is the definition of his title and Beast Boy says he's a leader with a badge, which convinces Raven, Starfire, and Cyborg to join him. BB tells them to pay 100 dollars, and they give him the money anyway, although Robin stops them. The three of them are now his money deputies, and he gives them badges and the four of them act like cowboys.

Later, Raven and the others recruit more people to join the Pyramid Scheme for money. Then the three of them eat “money salads” around a fire; Cyborg offers some to Robin, but he refuses and scolds them for it. Beast Boy frantically takes the money from Cyborg, Starfire, and Raven and explains that the boss wants his cut of the money; this shocks the Titans and a giant pyramid emerges from the ground. The Boss Mummy appears and asks for the money. Beast Boy gives him the suitcase, which only contains a few dollars and coins, along with a barely eaten sandwich. This enrages the Boss Mummy, so he forces the Titans to do hard labor for him in the hot sun.

Beast Boy admits that he was wrong for doing the Pyramid Scheme and Starfire angrily blames Cyborg for being selfish with his need for the perfect gift, and he claims himself innocent, saying that he would be happy with just a hug. Robin says that he is also wrong for his stupidity and selfishness, believing that pyramid schemes are really because of mummies. Then he says the only way to get out of this is with hard labor, but Raven says they're already doing that.

The Titans hide behind the huge stone block and Robin says the other kind of hard labor. Beast Boy transforms into a pregnant chicken and gives birth to an egg from which a chick emerges. Robin only wants the egg, not the chick, and shakes out hedge clippers. Robin uses them to free the Titans; he is now happy that Beast Boy has learned the value of hard work. When he asks about the mummies, the others say that he is still the sheriff, and they are still their deputies (with Robin joining). The Titans then defeat all the mummies, and Beast Boy engages a duel with the Boss Mummy, which he wins (without the need to fight the Boss Mummy, as he suddenly gets run over by a golden tank/vehicle with the song's fake Gold Bear). The Titans hang at a saloon, speaking with western accents, having learned their lesson about pyramid schemes, and the Titans ride on horses into the sunset.

The transcript for "Pyramid Scheme" can be found here.