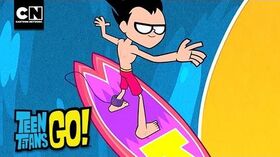 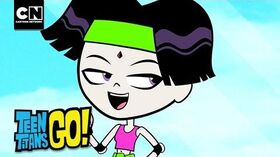 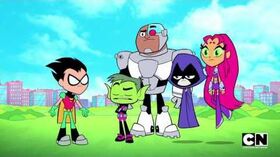 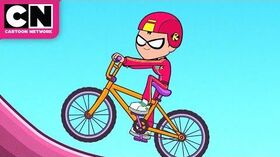 "Rad Dudes with Bad Tudes" is the thirty-fourth episode of the third season of Teen Titans Go!, and the one-hundred-thirty-third overall episode of the series.

Robin meets cool dudes on rollerblades and tries to emulate them in order to fulfill a dream related to his “parents”...

The episode begins with Robin doing a competition with the Titans to see who can pop the most bubbles. They encounter people with rollerblades, to which Robin gets very interested in. The others see them as "grandpas", and think that rollerblades are lame. Robin, however, thinks differently, and tries to talk with them. The rollerblades insult Robin while mentioning the Demon's Tongue, the most dangerous rollerblading race. Robin, feeling down, goes back to the tower.

Back at the tower, he talks to his "parents" about rollerblades. His "mom" shows Robin his "dad's" rollerblades. When Robin appears in the Tower, the remaining Titans are meditating with Raven. However, they see the rollerblade after Robin pops up and they decide to join in to show their support of a bad attitude. They then meet the two dudes from before, and they go to a showoff, insulting each other. Robin is challenged to the Demon's Tongue, which he reluctantly accepts. When they're about to shake hands, Robin psychs them and takes away his hand before they could shake, which would be considered an insult.

When Robin gets home, his "dad" meets him and asks where he is. They talk about the Demon's Tongue and rollerblades, when Beast Boy comes into his room. It turns out, not surprisingly, that Robin is pretending that he has a dad, and changes roles from his mom, to dad, or to himself. We hear more about the conversation, and then Beast Boy takes out some popcorn. As Robin exits his room with confidence, Beast Boy cheers him on.

The next day at the race, Robin and the two dudes are seen with two other random guys. The random two blow up into the race, and eventually, Chip, one of the roller dudes, loses his wheels on one of his rollerblades. He tries to get Robin to help him. Robin is about to do so but then turns out that the former has tricked him; instead Robin psychs Chip out, and the latter ends up falling into a pit.

The other dude Randy, attempting to avenge Chip, goes for the win, more determined than ever. Nonetheless, Robin pushes him to the harder way, to which Randy has his ambition being diminished as he burns in fire. As a result, Robin wins the race with his four friends merrily uplifting him, and when the two dudes are about to be taken to the hospital, they say it's just a race to ease their pain of being utterly defeated.

As a revenge for the two losers who humiliated him earlier, Robin says that it was a race that he won, roasting them. He then sees his imaginary parents, to which they hug each other. Since Robin is actually thinking up his parents, the rest of the Titans (except Beast Boy who has seen him with this behavior before) are wondering what he is doing followed by explosive fire as the episode ends.

The transcript for "Rad Dudes with Bad Tudes" can be found here.