Teen Titans Go! Wiki
Register
Don't have an account?
Sign In
Advertisement
in: Characters, One time Character, Males,
and 27 more

--Robin in In and Out

Red X is a villain persona created and used by Robin to gain needed access to H.I.V.E. Tower.

In the episode "In and Out," Robin wanted to infiltrate the H.I.V.E. Tower to stop the H.I.V.E. Five before their evil plan was carried out. To do this, Robin disguised himself as a villain: Red X. Upon arriving at H.I.V.E. Tower, Red X is immediately accepted into the H.I.V.E. and finds the main core to set a bomb. Gizmo invites Red X to join them for pizza, and he accepts after delaying the bomb's countdown. Numerous times after, Red X would set the bomb, then delay it, in order to join the H.I.V.E. in whatever cool activity they are doing. Only when the H.I.V.E. decides to get rid of Red X and the other disguised Titans does he reveal his identity, and engages in combat as Robin.

Red X wears a navy blue jumpsuit with a gray utility belt, gloves, and a light gray resembling the shape of a skull. A large red "X" is displayed on the forehead of the mask, and he wields two red "X"s as weapons. He also had a light and dark gray, hooded cape. Red X has also altered his voice to make it sound lower pitched, so as to disguise his identity as Robin even more.

Red X is back!

Come have some pizza with us.

This was supposed to be a one man's mission!

Red X tries to eat a pizza without removing his mask. 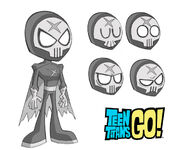