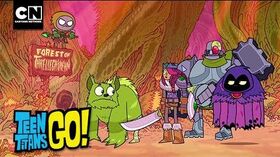 "Riding the Dragon" is the fifty-first episode of the third season of Teen Titans Go!, and the one-hundred-fifty-fifth overall episode of the series.

While playing a fantasy adventure game, the Titans are transported inside and must find the key to return home.

The episode starts with the Titans (excluding Robin) on an adventure. The group soon comes upon a dragon, and being the Titans they have to ride it while riding the dragon. We come back to reality, and see that they are just riding the couch as part of a board game that resembles Dungeons and Dragons.

Robin is upset that the Titans are doing this and says that the only way to have fun is to follow the rules of the game. He then tells the Titans that they will go on a magical adventure and tells them to do some math to figure out who they will be. Beast Boy reminds him he is not very good at math.

Annoyed, Robin says for them to draw their characters, and they all pick their characters (from the story Raven told in “Campfire Stories“) and start the game. But immediately, the other Titans disregard the rules, and Robin gets mad, then they are all sucked into the game.

They all look like the characters they chose, except for Robin, who is much shorter than the character he drew. Now that they are in the game, they want to look for the dragon. But Robin says that they must start where all adventures start: a tavern.

They walk in, and the owner tells them to help him with a rat problem. The Titans complain it’s boring, but Robin says it will be fun. They go to where the rats are but find the rats are giant Cyborg tries to attack. Unfortunately, since he rolls a one, he gets attacked by rats.

Raven casts a spell to makes them stop, which stuns them...for two seconds then they go back to attack Cyborg. Robin explains she is a level one, so that is her most powerful spell. She takes the paper to changes her level to ten and kills the rats. Robin protests it’s cheating but is distracted by an open door. Then, a musical montage unaided of Robin refusing to let the Titans do anything fun until the song ends.

There is a dragon, and Robin insists they should be quiet so that they don’t wake it. Unfortunately, they do not listen and try to ride it, and it wakes up. Robin blames the other Titans for getting stuck in the game. However, the dragon explains it was Robin’s lack of imagination that got them stuck. Realizing that he needs to have more imagination, Robin tries to ride the dragon, but it burns all of them, which brings them back to reality.

The transcript for "Riding the Dragon" can be found here.