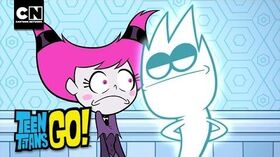 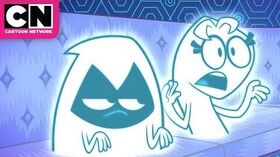 "Scary Figure Dance" is the thirteenth episode of the third season of Teen Titans Go!, and the one-hundred-seventeenth overall episode of the series.

The Titans' Halloween party is interrupted by the Hive Five robbing a candy factory, and after the battle hits a major shift, very strange things start happening around H.I.V.E. Tower.

The scene opens up to the Titans getting ready for a Halloween party. Robin, dressed as a werewolf, orders Cyborg, as a vampire, to carve a pumpkin. He responds by saying, "Yes sir!" and shoots a face with a pumpkin. Next, Robin tells Beast Boy, who is a pumpkin, to spin some spooky spider webs as Beast Boy turns into a spider and makes some webs. Robin runs to Starfire, dressed as a cat, and forces her to get apples for bobbing. She gets a bag of apples and puts them in a wooden container stating that she got them, but she could not find "the bob," although there was a zombie hand there. Finally, Robin tells Raven, dressed as a witch, to get some skeletons so she summons some up. Robin asks if they were from her "closet," but she says that they were from dead people. Robin tries to throw a Halloween party by putting on a song called Scary Figure Dance. Suddenly a crime alert warns the Titans that the Hive five is attempting to destroy a candy factory. Reluctantly, and angered by the interruption, Robin and the other Titans head out to stop the crime.

When the H.I.V.E are trying to destroy a candy factory, Robin tells them to trick-or-treat. Raven tells the HIVE it sounds like a trick, but she gets a treat for the HIVE. But it is too late, the HIVE blow up the candy factory all thanks to Gizmo! Cyborg starts to cry and Starfire is sobbing, telling them the "Hallow has become Unween". Gizmo tells the Titans that they have no ghost of a chance which gives Robin an idea. Shortly after the Titans are immediately disintegrated by a laser thus leaving the HIVE happy. While the H.I.V.E are throwing a Halloween party, Mammoth, dressed as a ballerina left lipstick smudge on a cup, Gizmo is hanging decorations, and See-More and Billy Numerous are watching a movie called Nosferatu. However, strange occurrences then happen. Lights flicker on and off, a trident pokes Gizmo's butt, Mammoth's cup is held by itself and pours juice on Jinx's costume, and the TV goes crazy by itself. It is revealed that the ghosts they live with are making ghostly noises, sounds, and moans. Gizmo tells the HIVE that the tower is haunted. Doors slam, static is shown on TV, and then the lights flicker again! The HIVE become scared and run off. See-More tries to call the Ghostbusters, but Jinx slaps the phone out of his hand and says: "the only way to get rid of a ghost is to find out what it wants by preforming a seance."

When they are doing a seance, Jinx tells everyone to be very quiet, but instead yells "HEY GHOSTS! WE WANNA TALK TO YOU! GET OUT HERE!". No one responds. Jinx says "What? Have you gone to a seance before?" And then the candles are blown and a glowing light is shown, showing the five ghosts of the Titans. The ghost of Beast Boy yells "What up, foooooooooooools?" in a ghostly tone. Mammoth tries attacking the Titans, but he falls on the floor. Cyborg tells him that they are ghosts! Gizmo tells the ghosts why are they talking like this and Starfire says this ghostly tone is how the ghosts talk. Gizmo finds it REALLY annoying, and Jinx told them to stop, but the ghost of Robin says no in a ghostly tone of voice. See-More begs them, but Billy thanks them which makes the ghost Titans stop. Though Cyborg still says "Just kidding" in a ghostly tone. Robin wants to enjoy their Halloween by ruining the H.I.V.E's as "scary" ghosts. Robin tells them it was a mistake in retrospect, and Raven makes decisions. Mammoth tells them they are not very scary, so the Titans start scaring them into making actual very demonic, nightmarish scary faces, causing the HIVE to scream and run off.

Jinx goes to an elevator to hide but the ghost of Robin comes in to show her the true meaning of fear, an awkward elevator ride! Billy Numerous and Gizmo go to look for the rest when they see Cyborg and Beast Boy go into a room. They follow and are terrified by the two ghosts. They end up getting slimed by Cyborg and Beast Boy. As for Mammoth and See-More, they end up being possessed by Raven and Starfire. Robin has coffee breath once and then haunts Jinx with an eye contact, bulging his eyes, which scares her so bad that she presses a stop button in the elevator and runs off. While the ghosts of the Teen Titans moan and make weird ghostly sounds, Gizmo has the only way to get rid of the Ghost Titans is to call the hospital.

When the doctors come, they put the Titans back into their bodies. Beast Boy tells the HIVE they are not talking like ghosts anymore, so See-More tells the Titans it was inappropriate. Both the Titans and HIVE have a good time and have the best Halloween ever. Robin puts on the Scary Figure Dance as the Titans and the HIVE dance to it. Until Cyborg accidentally makes Robin fly up into the sky (without pants!) when he uses his pitchfork to poke Robin’s butt. The episode ends with the text 'Happy Halloween'.

The transcript for "Scary Figure Dance" can be found here.