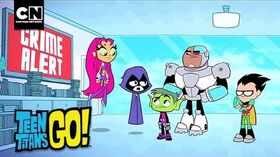 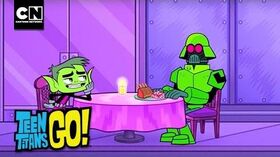 "Shrimps and Prime Rib" is the first episode and season premiere of the fourth season of Teen Titans Go!, and the one-hundred-fifty-eighth overall episode of the series.

The Titans try to remember how to be superheroes to stop The Brain.

It's just another normal day at Titans Tower when Cyborg enters the scene with fishing gear. The other Titans are eager to join Cyborg on a fishing trip, which they predict will be full of laughs. But before they can get their fish on, the crime alert goes off, startling them.

It seems the Titans have forgotten that they're superheroes, as they are not sure why they're receiving an alert. They've been busier with other stuff, like eating hot peppers, participating in totally organic crossovers, and learning about equity.

The Titans eventually, vaguely, remember that they're heroes. After some prodding from Robin, who believes they are the only ones who could save the day, the other Titans decide to respond to the alert. Robin yells: "Titans!" as they are about to leave, which scares the others. Robin isn't sure why he yelled either. He feels he's forgetting something.

Later at a warehouse, The Brain is in the middle of stealing a generator when the Titans arrive on the scene. The Brain is surprised to see them and looks on at them, undeterred. Robin yells, "Titans!" once again but is at a loss for words. The other Titans try to suggest how his iconic catchphrase should end, but nothing seems right. The Brain gets bored and makes his getaway.

The next scene takes place outside The Brain's lair. A robot guard stands between the Titans and the entrance. Beast Boy offers to use his skills to "take out" the guard, but he ends up romancing the robot with shrimps and prime rib. He ends the date by walking the robot home, opening up the entrance for the Titans. Robin is disappointed that Beast Boy didn't take out the robot in a more superhero-ish way.

Inside the lair, Robin locates a security camera. Getting past it will require some craft, which Starfire and Cyborg understand to mean arts and crafts. Using paper and glue, they make paper dolls which they use to cover up the camera.

The next section of the lair is a hallway covered with motion-sensitive laser guns. Robin says they will need fancy footwork to get past these traps, which Raven thinks to mean it's dance time. She, Starfire, Cyborg, and Beast Boy dance their way through and switch off the lasers.

Finally, the Titans find the generator. Beast Boy offers to take it out, but he just throws buckets of shrimps and prime rib at it. The robot from earlier sees this and becomes heartbroken. Beast Boy tries to explain himself, but the robot guard won't hear him out, deciding instead to set off an alarm. Soon the Titans are surrounded by robot guards and Monsieur Mallah.

The Titans find themselves pinned down by laser fire. Robin tells them that they are the only heroes who can stop The Brain. He looks deep into himself and finds the words he's been looking for:

This triggers the other Titans into remembering what makes them superheroes. They use their powers and abilities to handle the guards easily. As they are about to take out Monsieur Mallah, Kid Flash makes his entrance and takes him out. The Titans turn to destroy the generator when Bumblebee and Aqualad make their entrance and blow up the generator. Finally, just as The Brain makes his entrance in a robot body to destroy the Titans, Batman bursts through a wall and takes out The Brain's robot body with a birdarang.

Robin feels down because he thought the Titans were the only ones who could save the day. The other Titans try to cheer him up, telling him that there may be many heroes doing superhero things, but the Titans are the only ones out there being hilarious and singing about food.

Robin feels much better and leads the Titans into singing a song about shrimps and prime ribs, bringing the episode to a close.

The transcript for "Shrimps and Prime Rib" can be found here.