Slapping Butts and Celebrating for No Reason

Slapping Butts and Celebrating for No Reason

"Nostalgia is Not a Substitute for an Actual Story" 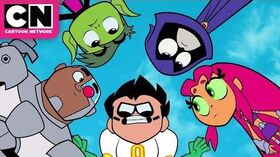 "Slapping Butts and Celebrating for No Reason" is the eighteenth episode in the fifth season of Teen Titans Go!, and the two-hundredth-twenty-seventh overall episode of the series.

When the Big Game is threatened, the Titans must infiltrate the football stadium and stop the attack.

It's another exciting day at Titans Tower—the team's about to watch some football, specifically the Big Game! Everything about the sport thrills them, from the bone-crushing tackles to the congratulatory butt slaps. Robin joins in on the party, but Cyborg and the others shun him; they're talking about footbawl, not his boring "fútbol" (aka soccer in spanish). Robin claims football has only 13 minutes of action time, but he's still gonna watch the game for the sake of tradition to not be an outcast in society. The alarm suddenly blares, though: someone's planning to strike the Big Game at the top of the 3rd Quarter. Looks like the Titans will be getting a front row seat...

Once the team arrives at the massive arena, Robin proposes a daring plan of infiltration—the four of them will slow down the game while Robin goes in disguised as a player and looks for the suspect. The mission doesn't get off to a good start when the Titans can't help but laugh at his Bea Arthur-looking shoulder pads. But Robin's focused. He heads to the tunnel entrance, where a Security Guard is doing his job—guarding. No matter what Robin tries to get in, he gets a massive hand to the face.

With the Big Game about to begin, Starfire and Cyborg rob two refs of their clothes and head out to the field. It should be no problem stalling the game while posing as referees, and sure enough, the penalties start flying immediately. And not for actual rules either; players are getting yellow flags for things like sweating, body odor, and knocking over flowers. The 2nd Quarter finally begins, but not after an onslaught of flags.

Robin still hasn't had any luck getting in, as his cheerleader outfit spells miserable fail and embarrassment, so Raven and Beast Boy continue the stalling as sideline reporters. First up is Raven's interview with the quarterback... well, more of a trashing of football than an interview. Beast Boy then carries on with a bunch of meaningless sports clichés. But before Beast Boy can get into the real serious stuff, it's halftime!

Posing as a drink cooler doesn't exactly fool the bouncer, so Robin orders the Titans to buy him some more time with the halftime show. With Starfire taking the lead vocals, the team puts on the Big Game performance of the century. Unfortunately, it only lasts several seconds, so they gotta continue with a bunch of other boring music to stall things out. Eventually, Robin bypasses the Security Guard (by pretending to be Bea Arthur), but it's no use... the 3rd Quarter is starting!

The Titans' worst fears have been realized when King Goal, lord of soccer, and all his Soccer Trolls emerge from the field. Still mad about the heroes ruining fútbol last time, he vows to ruin football for them this time around! Robin agrees to the match: if the Titans win, King Goal will never return, but if they win, football is OVER!

Right off the bat (even though this isn't baseball), King Goal manages to throw for a super long touch down. The Titans are already about to give up, but Robin's a master tactician, and he's not going down that easily. He figure that, since football is so boring, maybe they can bore the Soccer Trolls into losing! Cyborg assumes the quarterback position, and 48 minutes into the play, he still hasn't actually said "hike." The Soccer Trolls find this incredibly annoying, but it gets even worse when the Titans start doing ridiculous celebration dances and butt slaps. Eventually, King Goal goes crazy with all the boring stuff and stupidity and forfeits the game. Glad that football is safe, the team congratulate each other with more butt slaps.

The transcript for "Slapping Butts and Celebrating for No Reason" can be found here.