Teen Titans Go! Wiki
Register
Don't have an account?
Sign In
Advertisement
in: Season 3, Season 3 Episodes, Episodes focusing on all Titans,
and 9 more 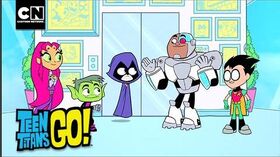 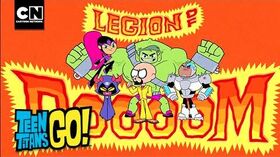 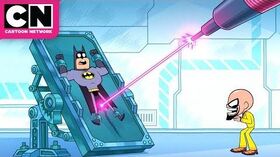 When yet another crime alert interrupts their relaxation, the Titans decide to become villains and do whatever they want.

Beast Boy, Raven, Robin, and Cyborg are in the living room, snuggling with kittens when Starfire walks in with some hot chocolate. She offers some to Cyborg, but he complains that there are no mini marshmallows. Starfire points out that they are indeed there, but they're just very, very tiny. All of a sudden, they get a crime alert from the HIVE, annoying them big time. The HIVE is on a rampage, shooting a death laser at different targets in Jump City. The Titans confront the HIVE for interrupting their "snuggle time," but they refuse to stop, forcing the Titans to fight. Robin, however, tries out the death laser and has lots of fun, and soon all the Titans are using it, making the HIVE think they're insane.

When the Titans arrive home, they decide that they would rather be villains so they could run their schedule. Being villains, they start maiming each other, saying that villains can do whatever they feel like. Robin transforms into Dick Gravestone, Starfire reverts to her old alter-ego Starfire the Terrible (character), Beast Boy turns into Beast Monster, Raven transforms into Demon of Azarath, and Cyborg turns into The Cyborg (with emphasis on "the"). Dick Gravestone then decides to name the new team of villains the Legion of Doooom (although they point out there is already one)!

The Legion of Doooom then hires a couple of henchmen to build a secret hideout while they relax. They all give some of their evil schemes during a conference: Raven suggests they rule the world underground through money; Beast Boy suggests mooning everybody; Starfire suggests stealing all of the world's kittens; Cyborg suggests they wrap the earth in a gigantic blanket and fart so hard, creating the world's largest Dutch oven. Their next move on their list of evil schemes is to torture a bunch of superheroes. Batman is treated with a James Bond-type of laser, Batgirl is dropped in a vat of chemicals, and Titans East are entrapped in a room with spiked walls slowly closing in on them from both sides. The evil ex-Titans laugh at their schemes.

Next, they get revenge on the HIVE for wasting their time by using the same death laser to destroy the city. The crime alert goes to the HIVE after the incident, and now it's their turn to be angry because they were now snuggling and got interrupted.

They go to the Titans and tell them that they're showing them how their actions have effected them. They know how it feels, but the Titans don't give a care about the world. After all, they didn't turn evil just for revenge and to teach them a lesson, they did it for fun, and they wrap the earth in a blanket and give it a gigantic fart.

The transcript for "Snuggle Time" can be found here.