Stan Lee (December 28, 1922 – November 12, 2018) was a comic book writer for Marvel Comics who briefly made an appearance in Teen Titans Go! To the Movies. In real life, he was well known for creating some of the most famous superheroes, such as The Fantastic Four, The Hulk, Thor, Spider-Man, and many more.

He was voiced by himself in the feature film.

During the movie, Stan Lee realizes that he's making a cameo in a DC movie, not Marvel. Since that could be copyright infringement or some kind of legal nonsense, he decides to leave. However, he can't help but stay, and later he comes back and randomly shouts "Excelsior!" 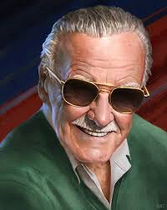 This photo should remind you that he's had a scandal or two. 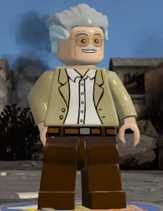 Lego version of Stan Lee
Add a photo to this gallery
Retrieved from "https://teen-titans-go.fandom.com/wiki/Stan_Lee?oldid=388963"
Community content is available under CC-BY-SA unless otherwise noted.