--- The Little Girl in Gorilla

Susan is a minor character that appears occasionally in Teen Titans Go! She is voiced by Tara Strong.

She is an little girl who is unlucky enough to have many bad, consecutive encounters with the Teen Titans.

In the episode "Gorilla," Starfire, Beast Boy, Raven and Cyborg were protecting a set of monkey bars while she was running happily towards them. She approaches them, only for the Titans to threaten her; she then runs off, screaming.

In "Artful Dodgers," she appeared on a dodgeball team, consisting of her and two other small boys. Robin, Cyborg and Beast Boy easily defeated all three of them, and then danced afterwards for their victory.

In "Smile Bones," she is seen feeding some farm animals. The Belly Bros, however, suck up the animals, and the Little Girl runs off screaming.

In "The Return of Slade," she is seen running away with other kids from Honk.

The Little Girl wears a cream t-shirt with an orange kitten's head on it, and an orange skirt. She wears cream socks that match the color of her t-shirt along with orange flats. She has blonde hair tied in two puffy ponytails with pink beads. She has big, black eyes. 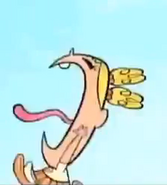