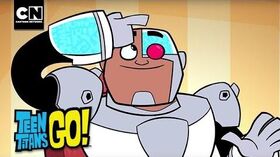 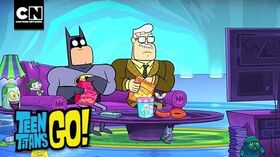 Batman and Commissioner Gordon check in on various happenings around Jump City.

The episode starts with the Batmobile rushing down the street as it quickly pulls into the Batcave, which is parked and put away. Batman pops the hatch, and a couch appears for him to sit on. He becks to Commissioner Gordon, whose head is in the fridge, he comes over, and the two try to throw cheese puffs and pretzels into each other's mouths. After Batman catches a pretzel, they turn on the TV and choose a scene involving Cyborg. He feels his head and (although it is bald) decides that he needs a haircut. First, he walks into a dog hair salon (realizing he has picked the wrong place), apologizes, and goes next door. A woman cuts his hair (which is invisible to us) and after added some combing and hair spray. He decides he looks handsome and leaves to chase the ice cream truck. After missing it and getting laughed at by some people with ice cream, he hijacks a car driven by Pain Bot and gives chase. He catches it, throws some money through the window, and gets a strawberry ice cream which he eats upside down until he sees the people who laughed at him earlier in the ice cream cone.

We then cut to the tower where Beast Boy finds Pain Bot, and after he repeatedly says pain (as Pain Bot does), he tries to find the source of his pain. He finds a thorn in one of his wires and pulls it out, which transforms Pain Bot to Hot Bot and causes him to say the word hot and dance to music; eventually, Beast Boy kicks him out. We then cut back to Batman, who needs to use the bathroom. While he's gone, Commissioner Gordon decides to eat pretzels until one is pooped on by a bat from above. So he gets another, and Batman returns to watch another segment. In this one, Raven reads on the couch with Beast Boy and Cyborg sit nearby when Beast Boy starts buzzing. He says it's his communicator and picks it up, turns out, Cyborg was calling him. He says hi, and Raven is visibly annoyed, so he hangs up. Then Cyborg starts buzzing. It's Beast Boy calling Raven to shoot them a look. Then her communicator starts buzzing, and she is mad. She picks it up, and both the boys say hello. She hangs up, and then things start floating as Beast Boy's communicator rings. It's from Raven. Both boys look scared and slowly pick it up, then Raven says "Oh, Hey" in a friendly manner, surprising them both.

Next, Robin chills in his room when he gets a call from Batman. So he hops on his motorbike, ignoring the warning, and rides off. The bike soon explodes, but Batman is still calling, so he runs. He gets to the top of a building and turns on a signal. Unfortunately, it was the doughnut signal, and the Batplane gets stuck in a giant doughnut. Much to Robin's shock, he runs away and then comes back to shut the doughnut light and then continues running. Batman takes off his mask to scratch his head, and Gordon wants to try it on. He agrees, but only if he can wear his glasses. They then do impressions of each other, laugh, and turn another short on.

In this one, Trigon is at the tower, waiting for breakfast. Raven cooks it even though he is impatient and makes her pour his juice. He eats it in one bite and starts playing with the ketchup. At first, she is annoyed by this, but he soon reveals it was a nice message thanking her for breakfast and has a picture of them. She smiles and thanks to him. After that, Cyborg and Beast Boy have a staring competition and make strange faces to break the other's concentration. After a few weird faces, Beast Boy wins, and Cyborg blinks. Back at the Batcave, the duo runs out of snacks, so Batman texts Alfred to send up more snacks. He does, and the table goes into the floor and comes back up stocked with snacks.

Now it's Starfire's turn, and it starts with her having a picnic when a crime alert goes off. The Mustard bottle (which is alive....apparently) tells her to get to work, and she takes The Jeff mask out of her basket and puts it on. The two hop into a car and chase down a car being driven by a Pickle and an Onion who shoot at them with ketchup and prompt Starfire to use the Mustard as a gun, and together they catch the criminals. Our last short is Sticky Joe waking up in a pile of dirty clothes in Beast Boy's room. The camera then goes to the bathroom, as Sticky Joe brushes his teeth and applies a sticky spray to his shoes. He skips out of the tower giving a hardy "Howdy!" to everyone he comes across as Robin passes by (Annoyed...) until Sticky Joe soon runs into Sticky Joan. They flirt a bit and he offers her a flower, but when she goes to sniff it, he kisses her. She slaps him and walks away while he gives a thumbs up to the camera as he gives another "Howdy!" Batman and the Commissioner look at each other and laugh as the camera pans away from the Batcave, ending the episode.

The transcript for "TV Knight" can be found here.