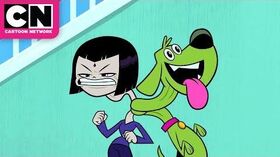 Batman is more interested in watching TV than participating in his birthday party.

The transcript for "TV Knight 3" can be found here.