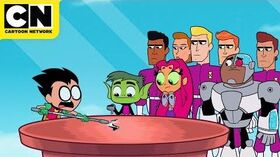 "TV Knight 4" is the twenty-ninth episode in the fifth season of Teen Titans Go!, and the two-hundredth-thirty-eighth overall episode of the series.

Batman and Commissioner Gordon go camping but instead of fun outdoor activities they'd rather watch TV.

Deep within a forest, the Batmobile cuts through the trees at breakneck speed, racing toward the Batcave. But Batman's not in a rush to fight crime—it's TV night with Commissioner Gordon again, and he won't be late for that. Unfortunately, Alfred's trying to get the two to enjoy outdoor camping, but they're more in a TV mood... so on with the show!

In the first clip, Beast Boy and Starfire are staring at a staple remover, oblivious as to what it is. The Challengers of the Unknown show up to try and explain the item's origin, but they end up being useless. Cyborg and Robin are afraid of it, but Raven luckily shows up and reveals it's staple-removing purpose... Next, a scene from a soap opera called Secrets of Eternity starts playing. The plot picks up with a buff Silkie telling Starfire a secret. From afar, Robin watches and rages for some reason. And for some, reason, all three of them have realistic mustache mouths.

Suddenly, Alfred wrecks their television. Batman and Gordon catch a lucky break, though, when the Catwoman runs by, fresh from a robbery. They offer leniency in exchange for one of her stolen TVs. Back to the show!

Flex, a highly mutated, highly intelligent mockingbird, is recounting the amazing evolution of him and his friends, the Birds of the Future. These guys must be on a DMT trip, because they are talking some really inter-dimensional stuff. Sadly, their quest for spiritual greatness abruptly ends with them splattering onto a window... Afterwards, more random scenes from Secrets of Eternity play: Cyborg's stolen Raven's Pretty Pretty Pegasus Toys, and Beast Boy's in the middle of a secret coma. There's really no good way to explain it.

Alfred's getting pretty annoyed—this time, he chucks their TV into a lake. But once the butler is distracted by Catwoman, Batman and Gordon follow Killer Croc down into the water to enjoy some of his under-the-sea TV. It's show-time!

The next video shows an exhausted Teen Titans team, winded from a wicked workout. Pain Bot's not gonna show any sympathy for their weak bodies, though. The robot earns his name by giving them a whole lot of pain, but boy, do the Titans gain—their bulging muscles are insane! Following this clip is a rap battle: Robin vs. Starfire and Cyborg. But instead of dishing out disses, they brag about improving the world through kisses.

Meanwhile, Alfred and Catwoman have ran into an angry bear. Fortunately, Batman's able to tame it with a bag of pretzels. Thankful for saving his life, Alfred now lets Batman and his friend watch one final video. Show must go on!

The conclusion of Secrets of Eternity picks up on a mountain ledge, where Robin's begging Silkie to spill his secret and thus end Beast Boy's coma. Before he can though, Silkie plummets down the mountain face. And then the twist comes: Beast Boy was secretly Silkie all along. Batman and friends then laugh into the night at this nonsensical trash.

The transcript for "TV Knight 4" can be found here.