"I Used to Be a Peoples" 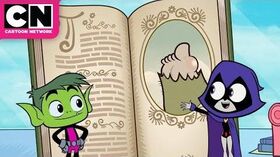 "Tall Titan Tales" is the twenty-second episode in the fifth season of Teen Titans Go!, making it the two-hundredth-thirty-first overall episode of the series.

Robin tries to tell some tall tales, but the other Titans give their own fractured versions instead.

While relaxing in the Tower, the Titans notice Robin enter the room, clothed in animal skins. He explains to them that he's dressed like Daniel Boone, an American frontiersman famous for crazy stuff, like his contagious yawn immunity. Cyborg and Starfire think Robin's lying, but he's telling neither fact nor fib—it's a tall tale, meaning it's somewhere in the middle. Raven and Beast Boy mock how a shorty like Robin is telling "tall" tales, but he ignores them and starts reading (from a massive book) the tale of [[wikipedia:Paul Bunyan|Paul Bunyan]. Before he can get into it, though, Beast Boy and Raven hijack his spotlight with the story of "Paul Bunyan" instead...

Beast Boy tells of a gigantic lumberjack named Paul Bunyan (played by Raven), a master of chopping trees. The only problem was that his boots were too small, which gave him a painful bunion. The pain was so great that Paul couldn't chop trees anymore. Luckily, though, the lumberjack's magical green socks (aka Beast Boy) had an idea: head west to the Good Foot Dr. So instead of buying some boots, Paul traveled across the dangerous wilderness, where he eventually ran into the doc, played by Cyborg. Everything turned out well... the doc sawed off the bunion—no anesthesia needed—and Paul bought a new pair of boots from a boot dealer (Starfire). Even the bunion got lucky, going on to own a used-care dealership.

Robin is pretty upset that these two have messed up the legend pretty badly, but he moves on to the tale of John Henry. Too bad for him though, as Cyborg takes control of this one...Way back when, there was a strong dude named John Henry, played by Cyborg, who was a respected railway steel-driver. One day, a rich capitalist (Robin) offered to sell him a steam-powered railway maker, but John figured his mere muscles were sufficient. A contest ensued between man and machine, but it turns out that John was no match. Accepting his defeat, he bought the machine from the capitalist, and now nailing spikes was too easy. Realizing that technology was the way to go, he built a train exoskeleton, "Ultrain", and defeated an alien invasion with it. Unfortunately, he was never seen again, but Cyborg claims you can sometimes hear him yelling "bladow!"...

With the second of his tall tales fudged up, Robin's really enraged. He demands silence from the Titans for his final story, but Starfire shoves him away when she learns it's about Johnny Appleseed. Assuming the role herself, she tells them of a pioneer named Johnny who enjoyed living outdoors with the animals. The only problem was that some of the critters were making fun of "the forest kitty" (a skunk) for being stinky. When they wouldn't stop being mean, Johnny began planting a bunch of apple trees... The reason? To stock up on apple ammunition. He returned to the cruel animals and unleashed an unforgiving barrage of apple machine gun fire. The animals became a military force and fought back, but were eventually outgunned. In the end, Johnny Appleseed marked the forest kitty with two white stripes to show that he was under Johnny's protection. Then he dashed to the defeated animals, and said "Eat the apples!". In the end, Johnny Appleseed gunned down all the animals.

At this point, Robin isn't even mad, he's just sad that the tall tales have been a waste of time. The Titans start cheering him up, saying that these myths can never compare to his inspirational leadership... but it turns out that they're just telling him another tall tale. Robin can only look on in sadness as the others laugh it up...

The transcript for "Tall Titan Tales" can be found here.