Teen Titans Go! is an American animated television series based off of a DC Comics superhero team, the Teen Titans. It was mainly created because of the successful New Teen Titans animated shorts. The show was originally released on Cartoon Network, like its predecessor.

Sure, they're still DC superheroes who save the day, but what happens when they're not fighting crime? They love to have fun and goof off, but they also have to deal with issues of being five teen roommates, whether that's chores and romantic tension or demon dad pop-ins and impromptu meatball parties. There's no shortage of pandemonium in the Tower as the Teen Titans get up to super-powered hijacks.

Since there are so many characters in Teen Titans Go!, only the main ones are listed below. However, here's a convenient link to a list of all the characters in the show: Character Guide.

You can read and learn more about the full cast and crew here.

Each season has a grand total of exactly 52 episodes -no more, no less - except for the third season, which has a total of 53 episodes. At this point, the show has six complete seasons-no more no less- except a seventh one which is currently airing.

Top of the Titans

A large allotment of merchandise and other items have been issued.

Figures, plush toys, Sonic toys, and playsets have released for a while. For the main article, click here.

There is several online games and apps based on the series. For the full list, click here.

Teen Titans Go! has been met with mixed reactions. Almost immediately upon the series' release, fans of the original Teen Titans complained that the show was not as well written or animated as the previous show. However, most media reviewers had a reaction to the contrary, believing that this was a well done reinvention of the classic series. Most negative feedback from the fans involves the change in tone, as many complained that the series should be dramatic, not comedic. Interestingly, children have apparently taken the series very well, as it has performed positively far beyond expectations. The series has garnered record ratings among children, with it currently being the number one show on Cartoon Network.

The series creators have taken note of the negative feedback, often treating it as a joke and making references to it in the series itself. In several episodes, the Titans mention that they are un-liked by fans of the previous series who considers Teen Titans Go! as an "abomination" along with other negative descriptions.

In "The Fourth Wall", the Titans become aware of their original counterparts, commenting that they were much cooler before and even questioned why not having a sixth season of the previous series to answer cliffhangers. "The Return of Slade" features the Titans commenting on the satisfying resolution of the original series that no one else will ever get to see. The episode "Wally T" gave the most blatant references, with the cast in awe that they had even one fan. Robin even questioned their fan further, asking which iteration of the Titans he preferred. In "Brain Percentages", when Robin refutes Cyborg's claim that TV shows are dishonest, an image promoting that a sixth season of the original Teen Titans series is coming soon suddenly pops up. As in "The Chaff", the writers of the series even go as far as to state that as long as it still provides cash flow for Cartoon Network, it won't finish for the time being, which ends up predicting it getting a sixth season.

Pushed aside from all the negativity this show receives, it is very successful and has been nominated more than once for a Kids Choice Award and even Emmy's. In fact, it has won a BAFTA in late 2019.

Teen Titans Go!, along with other Cartoon Network shows, had a collaboration with Mighty Magiswords in the app "MagiMobile". It had Magiswords based on some of the characters for players to collect, including Booyah Magisword, Beast Mode Magisword, Demon Rage Magisword, Laser Eye Magisword and Robin Magisword. 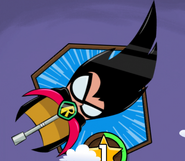 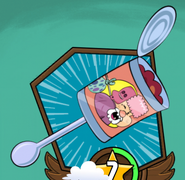 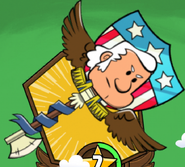 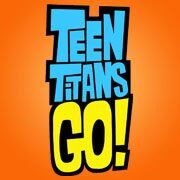 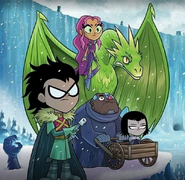 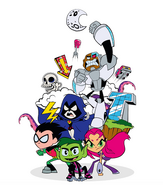 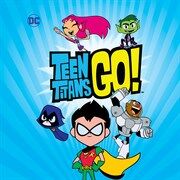 A concept art for the show.

only Robin and Starfire 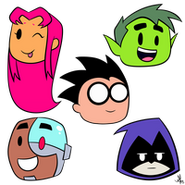 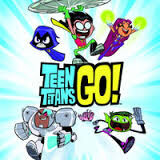 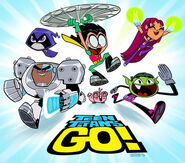