Teen Titans Go! to the Movies

View source
watch 01:23
Teen Titans GO! to the Movies: Official Teaser Trailer
Do you like this video?
Play Sound

Teen Titans Go! to the Movies 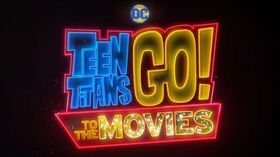 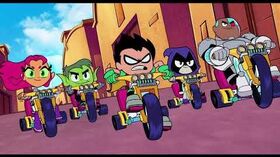 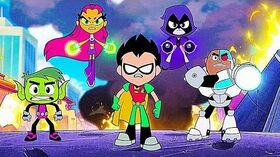 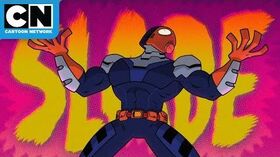 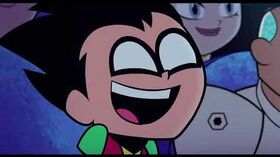 Teen Titans Go! To the Movies is a theatrical feature film based on the Teen Titans Go! series. The film was confirmed on Monday, September 25, 2017 by Warner Bros. The animated feature debuted in theaters on July 27, 2018.[1]

It seems that all the major superheroes out there are starring in their own movies—everyone but the Teen Titans that is! Leader Robin is determined to remedy the situation, and be seen as a star instead of a sidekick. If only they could get the hottest Hollywood film director to notice them.

With a few madcap ideas and a song in their heart, the Teen Titans head to Tinsel Town, certain to pull off their dream. But when the group is radically misdirected by a seriously super villain and his maniacal plan to take over the Earth, things really go awry. The team finds their friendship and their fighting spirit failing, putting the very fate of the Teen Titans themselves on the line!

In Jump City, the Inflatable Destroyer comes out of nowhere and starts destructing the city as well as robbing a safe from the bank. The police force can't stop him until the Teen Titans arrive. They even embarrass him by making one of his butts leak gas, which he denies it being a fart. However, when he cannot figure out who they are and mistakes them for the Guardians of The Galaxy, the Teen Titans jump into a rap song to explain themselves and become distracted, forcing the Justice League to intervene. They criticize the Titans for being childish and not taking anything seriously and even though they try to prove themselves by telling the Justice League how they saved room for desserts after buying burritos from a restaurant, the Justice League still brings up the fact that they do not have a movie of their own to prove their legitimacy.

The Titans resolve to head to the premiere of Batman Again where due to not being on the list, sneak in through Raven's portal and replace the Challengers of the Unknown by tossing them into another portal conjured by Raven. During the trailers for other upcoming films, Robin humiliates himself after assuming that there will be a movie about him and is laughed out by everyone, causing him to wail and runs out of the theater, which makes his friends sympathize him. At the rest of the team's suggestion, Robin resolves that in order to get a movie made about him and the Titans, they need an arch-nemesis.

Nearby, Slade breaks into S.T.A.R. Labs to steal a crystal. The Titans arrive and attempt to stop him, but he defeats them by using his "mind powers" (which in actuality are just childish illusory tricks) and makes off with the crystal, but not before telling the Titans that they are jokes. The next day, a distraught Robin is asked by Beast Boy to come into the living room to show them a movie that they had made for him. Robin turns it off prematurely after proclaiming his dream of having a movie about him and the Titans agree to head to Hollywood to make it possible. Upon arriving, they once again must sneak in and run into director Jade Wilson who is responsible for all the superhero movies being made. She turns down the Titans' request to be in a movie, but explains that the only way she would make one about them is if they were the only superheroes in the world. The Titans briefly take her words seriously by going back in time to prevent the origins of the other superheroes, but only end up ruining the future forcing them to go and undo their blunder.

Slade next arrives at Wayne Tech to infuse the crystal's power and the Titans arrive to stop him, this time putting up an actual fight. They secure the crystal, but Slade escapes, resolving to split Robin from his teammates. The next day, Jade invites the Titans back to Hollywood and announces that she will be making a movie about them due to their recent fight with Slade.

While Robin is given a tour of the premises, Raven, Beast Boy, Starfire, and Cyborg venture out and cause mischief. They find a Doomsday Machine that is heavily guarded; Cyborg tries to destroy it with a rocket shot from his back, only to have the rocket thrown away by Superman who belittles them as goof-offs and thinks that they won't be able to get past him. Raven declares that she and the three others are going to destroy the device, as the four defeat him by sprinkling and spraying Kryptonite to give him a "Kryptonite party" until Jade and Robin arrive as Cyborg kicks the fainted Superman away. Robin is astonished by their assault of Superman, but his four friends still doubt Jade. However, she convinces Robin to believe her by explaining that D.O.O.M.S.D.A.Y. is just a terrible acronym for a new streaming service (which stands for "Digitally Ordering Online Movies Streaming Directly At You") for the new movie she is making. She resolves to drop the rest of the Titans from the film and make it solely about Robin (since she reckons them as jokes), which he accepts as it means achieving his dream even though he sheds some tears, much to the consternation of his team. They wish him luck and Starfire even gives him a hug before departing.

Robin finishes making the movie and enjoys a lot of his fangirls' admirations, until he sees a little girl's picture about him and his friends. Scrolling through the memorable photos in his communicator, he begins to miss them, though Jade tells him to carry on with one last shooting. But during a scene where he interacts with the Titan Tower door panel, a light falls and knocks him out. He awakens and finishes the scene where Jade reveals that they are in the tower for real and that she is actually Slade himself in disguise. He gets the crystal back and plans to use it to control the world, having made numerous superhero films so that they would be too busy to stop him, before leaving a captured Robin to die by setting of the tower ablaze. Thanks to his baby-sized hands, Robin escapes the burning tower in the nick of time but after he resurfaces from the ocean, he can only watch he and his friends' home being destroyed. He then calls his friends back who gladly join to take out Slade. While the Titans unmask him at the premiere of Robin: The Movie, Slade unleashes the crystal's power and takes control of all the heroes who chase down the Titans. Robin goes after Slade while the rest of the team leads off the heroes. Although this results their car getting crashed, Raven manages to teleport the brainwashed heroes into the universe where the Challengers Of the Unknown being sent to, causing the innocent Challengers to be attacked by those heroes.

Robin then attempts to destroy the gem by tossing a bomb, only for Slade to catch it and throw it away. Having no choice, Robin has to have a close combat with Slade, but Slade takes the advantage, and by damaging the rope of Robin's grapple hook, manages to cause Robin to fall into a place full of screens that soon play the movie about him. In the beginning, Robin hopes to refrain himself from watching them. However, when the Titans arrive and destroy the screens, Slade has already used his new power to control Robin by forcing him to watch his own movie and tells him to attack his friends. Beast Boy and Starfire try to stop him but to no avail as he violently kicks Beast Boy (much to Raven's concern) and uses his staff to electrocute Starfire who screams in agony before tossing her away. As the four are being cornered, Cyborg inserts the tape of their homemade movie to show Robin the rest of it. At first, he still believes that they regard him as a joke, but when he sees how they credit him for bringing them together as a team and regard him as a true hero, Robin comes to his senses and Slade then becomes a giant robot, then telling them that there was no way they would defeat him and farting ,dancing and annoying him with their waffles wouldn't work. The team takes out Slade together, defeating him and his giant robot with a remix of their song "Go" after Slade teased them about defeating himself with it. Slade, who manages to use his remaining strength to get out from his destroyed robot, passes out after admitting that the Titans' rap is dope, and the Titans all celebrate.

The heroes all congratulate Robin and the other Titans for their heroism, with Robin admitting that he has learned to be himself. When he tries to go on, everyone demands that they cut to the credits immediately with Robin attempting to stall so that "kids can ask their parents questions". Starfire tells him that this isn't the type of movie for that. Robin then swings up to the screen to tell the kids watching to ask their parents where babies come from, and the credits roll.

In a mid-credits scene, the Teen Titans from the 2003 series show up on a distorted screen telling the viewers that they "may have found a way back".

In a post-credits scene, the Challengers of the Unknown are still trapped in the portal with their leader, Ace Morgan, postulating that they missed the movie.

The movie received critical praise and was even considered a pleasant surprise for non-fans of the series. The film currently has a 91% on Rotten Tomatoes where critics mostly praised the film for its cast, humor, meta storyline, stylized animation quality, and refreshing tone.

Critics often referred to the movie as "Deadpool For Kids".

The full list of songs in "Teen Titans Go! to the Movies" can be found here.

The transcript for "Teen Titans Go! to the Movies" can be found here.